Defenders of the faith: why right-wing populists are embracing religion. 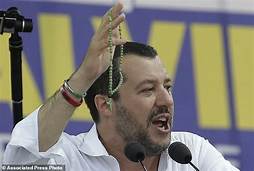 Tobias Cremer over at the New Statesman has a very interesting article on the very observable, growing presence of Christian symbols and themes in rightwing populist movements throughout Europe and the United States. Whether we are talking about Patriotic Europeans demonstrating against the Islamization of the continent, the Italian League’s Matteo Salvini holding up a rosary during a campaign speech, or signs thanking God for President Trump at his rally. We are seeing two very noticeable phenomena coming together; one, we are seeing a clear rise in nationalist rightwing populism and two, we are seeing mass expressions of a resurgent religiosity that to philosophers like Nietzsche was supposed to have died off over a century ago. And the combination of these two dynamics are fundamentally reshaping politics.

Cremer rightly sees these two dynamics as interrelated responses to the effects of secularized globalization. Nationalist populism is a cultural backlash against unfettered immigration, particularly from North Africa and the Middle East in Europe and south of the border in the United States. This resurgent religiosity is a cultural backlash against the hyper social liberalization and cultural Marxism that actively attempts to destroy a population’s culture, customs, and traditions.

For most of the 20th century, the two major political concerns have often been at different sides of the political spectrum. On one side, you had the concerns of workers as over against capitalist owners that is the supposed proletariat vs the bourgeois. On the other side of the spectrum, you had a cultural struggle between social conservatism and social liberalism, between the traditionalists and the progressives, or the advocates of religion vs advocates of the enlightenment. So the politics of the 20th century were largely dominated by issues of economic redistribution and taxation and a shrinking middle class, but also issues of abortion and sexual liberation and gender and church-state relations and the like.

What makes the politics of the 21st century so unique is that these two sides of the political spectrum have actually begun to come together around an even bigger issue, and that is the issue of cultural and national identity. What we are finding from the data coming out over the last few years is that concerns of immigration have become the single greatest issue for the most amount of people throughout Europe and the United States. The most cited motive for pro-Brexit voters was unfettered immigration. In the 2017 German national election, exit polls found that refugees and foreigners were voters chief concern and that resulted in the nationalist populist Alternative for Germany storming parliament for the first time with 13 percent of the vote. Studies of Trump’s voting base in the 2016 election found that immigration, not their personal economic situation or even social issues like abortion, was their number one concern.

What we are seeing is that these twin concerns about workers’ rights on the one hand and social issues on the other are coming together into a new alliance that has begun to reshape the political landscape across Western democracies. That is one where national identity is now pitted against the globalist ideals of universalism and diversity. It is now a politics of what some call civilizationalists vs. globalists. Or those advocating a ‘closed society’ vs those advocating an ‘open society’ or ‘communitarians’ vs ‘cosmopolitans’, ‘populists’ vs ‘elites.’

And what is so interesting, what this fellow Cremer notes, is that the traditional party systems, the center-left and center-right are totally ill-equipped to deal with this new political fault-line. You know, the centrist politics of Tony Blair and Bill Clinton and Gerhard Schröder or more recently Angela Merkel or Mitt Romney or even Nancy Pelosi simply lack the frames of reference to make any sense of this political paradigm shift. They want to talk about workers’ rights in purely economic terms. or in the case of globalist conservatives, they want to address abortion and same-sex marriage in terms of this universalistic notion of ‘family values. These centrist globalist approaches are more and more ringing hollow in the ears of an increasingly nationalist populist electorate. Instead, Western populist leaders are beginning to talk about the working class and traditional Christian sentiments in distinctly ‘identity terms’ as makers between ‘us’ and ‘them.’ We are for the workers, they are for the corporations. We are for traditional rural values, they are for liberal progressive cosmopolitan lifestyle values .We are here to protect your way of life, they want to destroy it.

An interesting development in all of this is that immigration itself is being recast in thoroughly religious terms. Whereas Europeans a few decades ago may have been concerned about the number of Turks coming into their nations, or the populations from Pakistan growing within the UK. Today, the concern throughout Europe is more the Islamization of Europe. You see, the immigrants are more and more being seen in terms of their religious and cultural identity rather than their country of origin. and so, if the concern about immigration has turned into a concern over the rising number of Muslims in Europe. then the counter to that must be a resurgent defense of Christian identity, which is of course what we are seeing particularly in nations like Hungary and Poland.

Unfortunately, the author sees this as populists hijacking Christianity and he seems to be utterly oblivious to the counter argument that it was the Marxist globalist left that has up until now hijacked the churches, particularly the mainline churches, and that populists are trying to rescue the church as part of their attempt to rescue their nations, cultures, customs, and traditions from globalist assaults. Globalist analysts have to denigrate the nationalist populist right if they are going to get their articles published, and this author fulfills such requirements. But I do think he did a good job at showing the changing political paradigm in Europe and the United States around the issue of national identity. And as such, he is echoing other scholars who have recognized that the politics of the 21st century are being more and more defined around what we are calling here ‘post-security’ politics . Post-security politics is driven by three major forms of insecurity that have arisen over the last few decades as a result of the anti-national, anti-cultural dynamics inherent in globalization, and in many respects these three forms of insecurity all intertwine with one another. Because globalism is transnational, it renders borders irrelevant, both in terms of electronic money as well as unprecedented immigration rates. Globalism destroys economic security by virtue of what is called a global division of labor, where manufacturing and industry are relocated to third world nations all the while finance is re-allocated around first world urban centers, leaving rural areas with extremely high levels of unemployment. Finally, globalism is perhaps most infamous for killing off distinctive cultures and customs with a consumer-based culture that pushes progressive lifestyle values at the expense of traditional culture and customs, all the while the culture is being eradicated by massive immigration levels; and so you can see that post-security politics forms a self-contained loop where each insecurity feeds into the other.

And so, it is no surprise to see the two political issues that dominated 20th century politics. economic and social issues begin to come together in a new nationalist populist coalition of civilizationalists that are together standing up for both workers’ rights and Christian identity in the face of globalist assaults. The rise of the nationalist populist and traditionalist right is the politics of the 21st century. And in many ways we have not seen nothing yet.