Dems Committing Suicide Ahead of Midterms!!! 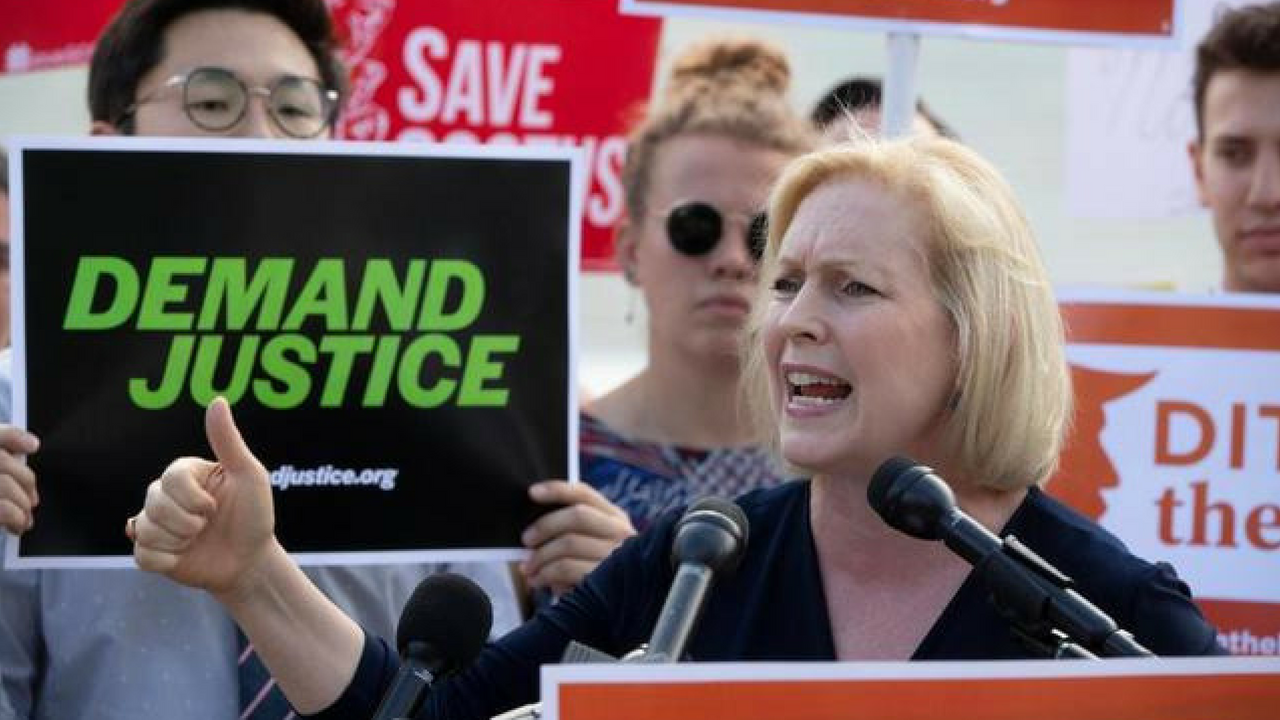 The Democrats are committing suicide entering into the midterm elections.

I am sure by now most of you have heard about the upset in one of New York’s congressional districts where this rabid socialist Alexandria Cortez defeated longtime incumbent Joe Crowley, who in many ways is a kingmaker in Democratic politics and was considered a shoo-in to win the nomination. One of her more radical positions is that ICE, the Immigration and Customs Enforcement, should be abolished. This has been a refrain of hers throughout the primary; you know, when we see children separated from their parents, that is exactly what ICE was created to do; we must have the moral and political courage to abolish ICE, and so on.

One of the more astonishing developments within the Democratic Party’s rank and file is a growing chorus of voices echoing precisely just such a call to abolish ICE and border enforcement. The morally illiterate New York mayor Bill de Blasio is now calling for the abolition of ICE, along with New York Senator Kirsten Gillibrand and several other prominent members. Kamala Harris of California is toying with the idea. In fact, many of the activist groups within the Democratic Party are calling the abolition of ICE and immigration border enforcement a litmus test for the party’s 2020 presidential nomination.

In one sense, I predicted this; that the Democratic Party would move farther to the left, the Bernie Sanders socialist left, similar to what we are seeing in Europe. The center-left, the globalist left has largely collapsed and populations are turning either to the so-called far-right which is caucusing with the center-right party, or their going with the far-left socialists such as Syriza in Greece. Either way, the days of the corporatist globalist center-left that were so popular in the 1990s appear to be over.

Now, let me explain to you why this move to the radical left is nothing short of total and complete political suicide.

As I noted, the reason both sides are going farther to their respective right and left positions is because of the increasing collapse of globalism as the reigning political and economic paradigm over the world. And the reason why globalism is collapsing is because it is built on the philosophical foundations of modernity, which has basically died in the hearts and minds of the world’s population. Modernity is simply defined as the notion that scientific rationalism is the one true way of understanding reality for all people, times, and places. Modernity is the notion that scientific rationalism provides the one true way of understanding all of reality for all people, and is thus the philosophical grounds of virtually every globalist institution that we see today; modernity is the philosophical grounds of our political institutions, economic institutions, educational institutions, industrial and manufacturing sectors, our film, modern art, media and entertainment. Every square inch of globalization is built on a philosophical commitment to modernity.

Here is the problem; scholars widely recognize that very few people in the world actually believe in modernity anymore. Our political elite do; our Hollywood executives do; our corporate CEOs do. But not the vast majority of the world population. THIS explains why you have the rise of populism all over the world; because there is this radical disconnect between the globalist elites who continue to export the fruits of modernity all the while its roots have rotted out and died in the hearts and minds of the world’s population.

Samuel Huntington and Stepan Mestrovic and many others, what they all noticed was that as a result of this turning away from modernity, global populations are increasingly rejecting a globalist vision of politics, economy, and culture, and instead, the world is fracturing, it is balkanizing as populations increasingly turn inward to their own cultures, customs, religions, traditions, land, language, and ethnicity as the basis for a sustainable social order. And as a result, populations are reasserting their national sovereignty and border security as mechanisms of resistance against globalizing, open border dynamics. We simply do not live in a philosophically modern world anymore, we live in an increasingly postmodern, post-secular world that reasserts culture, custom, and traditions as mechanisms of resistance against the anti-cultural processes of globalization and its secular aristocracy.

THIS is why border security has become such a hot political issue of late, and by the way, all over the world. There was a fascinating article that came out that declared 2016 the year of the wall, where border security was tightening up quite literally everywhere: we see it with India’s border with Pakistan and Bangladesh, Israel/Palestine, and Saudi Arabia/Yemen, we are even seeing border walls in France, Hungary, Austria, Italy, and Greece. Everywhere we look, border walls are going up, they are not coming down.

So by celebrating open borders and the dismantling of border security, the Democrats are claiming out of one side of their mouths to be rejecting globalism, in terms of the Bernie Sanders’ inspired socialism, but on the other side of their mouths, they are continuing to advocate policies that are nothing less than hyper-globalist, like open borders. So they are putting forward this strange contradiction. They are trying to overthrow the center-left leadership, Di Blasio basically said that if Bernie Sanders had won the nomination he would have beaten Trump, and said this of course after he voted for Hillary Clinton. Nevertheless, this is his attempt to show that he is not part of the corporatist globalist left; they are trying to overthrow the center-left leadership, and yet, even the far-left socialists cannot seem to pry themselves away from the kind of world order predicated on globalism. They want open borders, they want identity politics, they want international human rights. These are all globalist. They are just replacing one corporatist globalist left with another kind of globalist left, and THIS during a time when the world is more and more rejecting globalism as the reigning transnational political paradigm.

So the Democrats are doing nothing less than committing suicide by thinking that a borderless, open the flood gates to immigration, sanctuary NATION (forget sanctuary cities), will win the day. That may have played in the 1990s, you know, the vanguard of globalism, with Bill Clinton and Tony Blair and Francis Fukuyama all celebrating the end of history and the triumph of liberal globalization over the entire world. But that world is dead.

And so the Republicans have a HUGE advantage here. That advantage is of course, in survey after survey, Republican voters see immigration enforcement as more important than taxes, healthcare, EVEN GUN RIGHTS because they know that if they do not get the border enforced, everything else falls apart. And the polls confirm that more Americans than ever support the arrest and deportation of illegal immigrants. There is no two ways about it. I’ll share with you a little anecdote. My daughter, bless her heart, my 16-year-old daughter went to get her driver’s license just the other day, yes please pray for us. This very nice lady at the DMV told her that she could go ahead and register to vote, though she cannot vote until she is 18. I asked if she had to pick a political party, and this very nice lady said, no, she can register as unaffiliated, but she will not be able to vote in the primaries. I just quipped that, well, we are Republicans and so that does not matter in Delaware; Delaware is the home of the borderline illiterate Joe Biden and is very, very Democrat. This lady, who spoke with accent, looked at me and said, in almost a whisper ‘There’s always hope!’ She then proceeds to tell me that she and her husband immigrated to the US from Germany several years back, and how disgusted she was by all of these illegal aliens who all think they can get special treatment and just jump to the front of the line when every immigrant who is doing it legally is being told basically they have to stand in the back and wait. Citizens and legal immigrants cannot stand the notion that illegal immigrants are given so much politically preferential treatment. Send them back and let them come in legally, which has always been Trump’s position by the way!

Now, if this is going on at your local DMV, if our local DMV in the bluest-of-the-blue Delaware has workers disgusted with the open border policies of the Democrats, this is utter and total suicide on their part. We will certainly be keeping our eyes on how things develop, but Trump and the Republicans are already pinning calls for open borders and the abolition of ICE on all Democratic candidates, painting as far-left lunatics who continue to stand for the worst of globalization at time when most voters are turning away from it. If that is the case, if they are effective in doing that, we may not be seeing just the beginning of a red wave; we may be seeing a political earthquake that will turn that wave into a tsunami.