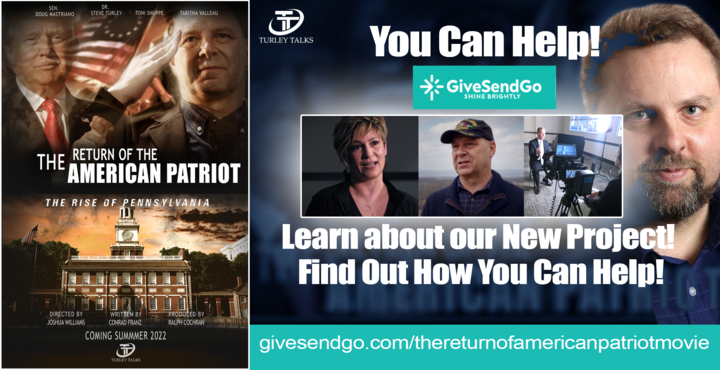 Despite the efforts of woke activists around the state, Turley Talks Productions first original documentary, The Return of the American Patriot: The Rise of Pennsylvania, will be premiering to an even larger audience than previously anticipated. Be sure to support the film HERE and help us fight back against the rabid, leftist mob! And be sure to secure a ticket (new venue is expanded) while they are still available if you are in PA! Watch your email for location info!

We fought back and secured a venue 2x the size...

Initially, the documentary was set to premiere at the IMAX theater of Penn Cinema in Lancaster county Pennsylvania with Senator Doug Mastriano and other high profile conservatives from around the state and country in attendance. A vocal minority of woke activists, with too much time on their hands and admitted hatred for those putting Christ and America first, spammed the cinema with calls, anger, and threats of violence. The owner immediately caved and bowed impotently to the mob.

No honor & no spine! So embarrassing to pretend that these lying left wing activists represent the entire community!

Lol these people are petulant children. We are planning a much bigger premiere now tho. Thanks 😉 pic.twitter.com/rpuq0geaJc

In the following days, the Wyndham Resort was secured for the screening and the threats of violence escalated dramatically (including threats of drone violence and arson) and the resort felt they could not adequately prevent disruption and disappointingly backed out. Despite the gloating of activists and losers the premiere is having a larger audience than previously imagined and will occur ON TIME and ON SCHEDULE regardless of what these clowns and wannabe commissars have to say. Because of their whining we will have a larger audience than ever! Thank you all for the prayers!

There is simply nothing you clowns can do to stop it 😂😉🇺🇸 pic.twitter.com/fUwGjYhGE1

Are the LOSERS who have nothing better to do than spam call theaters still gloating? 🤣

This premiere is going to be huge. Big things coming. Just you wait 😉

🇺🇸 ⚡️If you want to help us fight these deranged mobs you can support our movie HERE: https://t.co/uRfqcYvEYH