Evangelical Leaders Pray Over Trump at the Oval Office 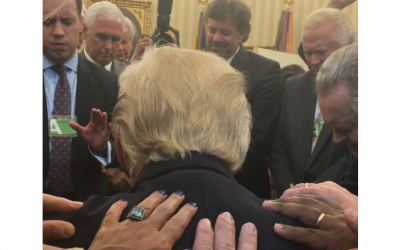 The Drudge Report featured as its major headline, a picture of evangelical leaders surrounding President Trump in the oval office; they are pictured as laying their hands on him and praying over him and asking for God’s blessing and protection of him and the USA. Among the evangelical leaders were Ralph Reed, the former head of the Christian Coalition and now running the Faith and Freedom Coalition, Jonny Moore, senior vice president of Liberty University, and Michele Bachmann, the former Republican congresswoman of Minnesotta. Mike Pence is pictured as praying among the leaders as well.

Now, of course, not everyone buys this; there are several prominent evangelicals such as Russell Moore, and Al Moehler, who are very concerned that evangelicals are risking the collapse of their moral witness in getting so close to a President who has so many obvious moral failings. The online Christian Post in particular has published a number of editorials highly critical of evangelical leaders embracing Trump, and of course, the reason for such criticism is rooted in Trump’s moral discretions, both past and present, and the inevitable appearance of hypocrisy among evangelical leaders for overlooking such discretions in the name of political power.

Now, I don’t know if you have dealt with this issue firsthand, I certainly have, given my full support of President Trump and his administration. I have been told that I am a hypocrite for supporting someone that so obviously falls outside of the moral parameters of my faith. And so one of the things that I try to do when this comes up is give what I hope to be a bit more of an aerial view of what I see as really going on, particularly in terms of this kind of critique. I think this kind of critique can miss an inherent discrepancy within its own interpretive parameters, that is itself rather problematic.

First, what I like to point out is that there are two very different ways of analyzing people and society, culture and politics. What skeptics towards Trump’s supposed Christianity tend to do, however inadvertently, is they look at Trump through the lens of what is called an individualist evaluation, or more formerly known as methodological individualism. This is a theoretical and interpretive approach that explains how various social and cultural phenomena results from the motivations and actions of individual agents. This is an approach that we tend to see in economic interpretations and of course in historical interpretations. In 1492, Columbus sailed the ocean blue. Here, we are interested in the historical significance of an individual person; we focus on their characteristics and traits (Columbus is a determined explorer), and then we look at how those characteristics and traits affect social and cultural phenomena. We use methodological individualism in the study of rhetoric, where we read the great speeches delivered by particular people. So we learn ‘Four score and seven years ago’ as the words of Abraham Lincoln which were influential in the civil war, or ‘Tomorrow, … creeps in this petty pace ….’ as from the pen of William Shakespeare and development of the English language.

But this rhetoric example is quite fitting, because when we examine the great speeches of say an Abraham Lincoln or JFK or Alexandr Solzhenitsyn, we are examining them in light of larger standards and protocols of rhetoric, that actually go back thousands of years. So, in one sense, we appreciate the speeches at the individual level, at the level of the one who actually wrote and delivered it; but in another sense, we are examining the speeches in terms of how they reflect and indeed embody standards and forms and procedures that transcend the individual person. Now this is what we call a holistic interpretive approach; holistic approaches examine the cause and effect processes of events in light of larger cultures or social structures of which the individual agents are a part and cannot be understood apart from. We have all heard the expression: we are all creatures of our age. Well, that is certainly right; we all embody social dynamics that are larger than ourselves. So from this vantage point, we would be interested in looking at Shakespeare as a creature of the Elizabethan age, of how his plays reflected the political, social, and cultural norms of the period. Or we would look at Alexandr Solzhenitsyn in light of the great struggle between the Soviet East and the Democratic West, and so on.

Now what some of the commentators over at the Christian Post are doing, as well as a number of other skeptics towards Trump, however inadvertently, is they are applying a methodological individualism to Donald Trump while at the same time applying a holist interpretation to the evangelical leaders who prayed over him. In other words, when it comes to Trump, they are interested in pointing out his own characteristics and traits, in this case, past foibles and moral failings, and then, they point out that as evangelical leaders, these people praying over him should know better; there is no way that they can reconcile what they supposedly believe as ‘evangelicals’ – there is the holist term – with who Trump is in individualist terms.

But what if we apply the holist interpretation to both Trump as president and the leaders as evangelicals. Now what kind of picture emerges? We have Trump as President pledging to use the Federal government to protect Christians and the Christian church. Now in Christian theology, THIS is the fundamental role of the state, the protection and preservation of the Christian faith; THIS is the whole means by which the state is redeemed, the means by which the state is incorporated into the transformative life, death, and resurrection of Christ. The protection of Christians is what separates a Constantine from a Diocletian. Now, viewed from this holist perspective, wherein is the discrepancy between these praying pastors and President Donald Trump? He is exercising his redemptive role as a civil magistrate in pledging and indeed practicing the protection of Christians and the Christian church, and these pastors and evangelical leaders are exercising their redemptive role by praying over him and imploring God’s blessing over him. Where’s the discrepancy? They are both fulfilling their roles as prescribed by historic evangelical faith.

My problem with all of this is why are we only looking at Trump through an individualist lens? Who dictated that that is the only way of accurately interpreting and understanding him? Newt Gingrich has recently pointed out in his new book that given all the foibles and moral problems with this guy, we are dealing with someone who understands the globalist-nationalist dialectic as is the governing political paradigm of our age, and he understands that a resurgent civic nationalism is indispensable to the preservation of Christian-inspired Western civilization. That is somebody I want as president; I will take someone like that as President over against a morally approved choir boy secularized globalist any day. Now of course, I know there’s a third option, we can have the morally upstanding evangelical who understands the globalist-nationalist dialectic as the governing political paradigm of our age; and we will see that person; I most certainly believe we are seeing that person emerge in the form Mike Pence. And so that’s what’s going to proceed from this trajectory. And Donald Trump is an indispensable part of this trajectory.

So, I for one am very happy to see the oval office door wide open for evangelical leaders; I pray that their prayers will be blessing to our president and his administration as they fight the good fight against secularized globalization, a battle that unfortunately so many pious evangelical leaders blinded by individualist lenses have refused to fight.