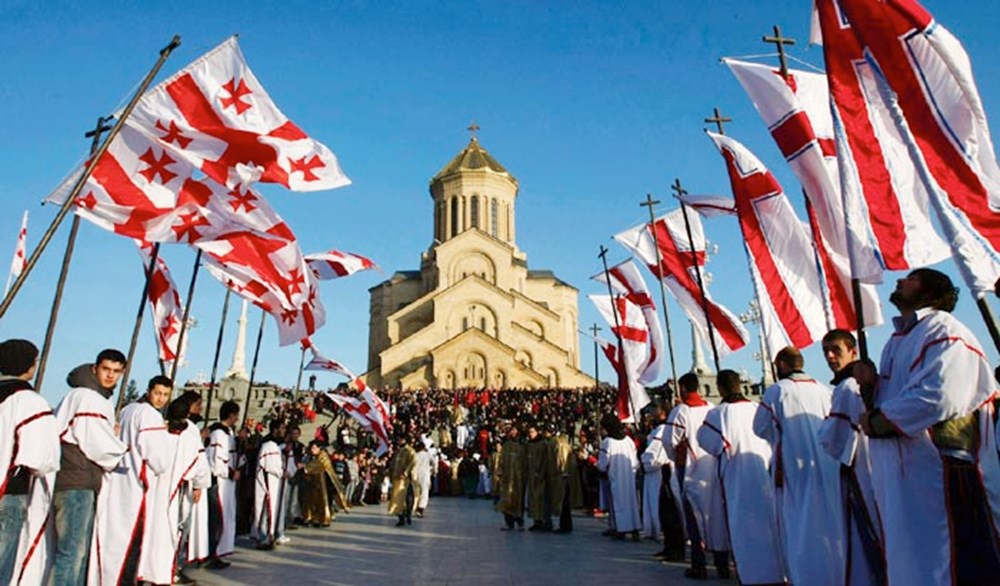 Perhaps no other nation currently in the fold of the Globalist American Empire (GAE) and the general “west” has so sharply clashed with cultural rot of our times than the small Caucasian nation of Georgia. Due to its border and disputes with the Russian Federation, Georgia has welcomed many NGO’s and western missions into its borders and has many voices calling for NATO membership. Despite this seeming embrace of Western internationalism, the Georgian people have strongly rejected the cultural imperialism that comes with such fraternization with globalists. This rejection was seen by all when in early July 2021 a pride parade was attempted by largely foreign agitators and western diplomats in Tbilisi, the capital of Georgia. The Georgian Orthodox Church as well as grassroots nationalist and pro-family activists sharply condemned the demonstration and organized massive counterprotests. The office of the foreign entity known as “Tbilisi Pride” was also scaled and had its rainbow flag taken down. Western journalists were quick to be outraged and call for condemnation of the Georgians who disrupted the event however in Georgia over 84% (according to the ISSP) of all citizens believe same sex attraction and actions to be wrong so these outside condemnations had little effect on Georgian public opinion.

This mass resistance was possible due to the high trust among Georgians and members of the Georgian Orthodox Church (GOC). Georgian is a very confusing and unique language but has been preserved for thousands of years in the context of deep religious and cultural ceremonies and it is one of the many things that keeps Georgians so closely knit together. The Church performs all duties in the high Georgian language and is currently the most trusted institution in the nation with Patriarch Ilia II, the head of the Georgian Church, maintaining an 89% approval rating. Patriarch Ilia is one of the most popular national figures in any nation and is regarded by many as a living saint. In 2007 the Patriarch pledged to personally baptize and become the godfather of any third or higher child born to Orthodox parents in Georgia. At that time Georgia was experiencing historic lows regarding birthrates and has since seen a spike in larger families and new births in the country.

Georgia also largely maintained some normalcy during the craziness that was global lockdowns in 2020. Over 90% of Georgians are members of the GOC and despite pressure from international organizations Churches nearly all remained open on Sundays through the Easter season and into the summer. The Georgian Church has also not succumbed to international pressure to assist in vaccine distribution or advertising with multiple Georgian Bishops warning their flocks and congregations to be wary of the experimental injections. Bishop Saba, a beloved hierarch in the GOC, warned (Georgian source) that the vaccines were not so much about health but being used to “control people” and “sway people and easily seduce them into sin.” With the new reality of vaccine passports to enter night clubs and music festivals it seems the Bishop was quite right when he delivered those remarks in early May. Even though there exist networks of money and power within the Georgian nation to encourage these globalist measures the culture of the people nurtured in their ancient church and ancient language have protected them from much pernicious media influence and secularization that is so rampant in the English speaking world and the west in general.