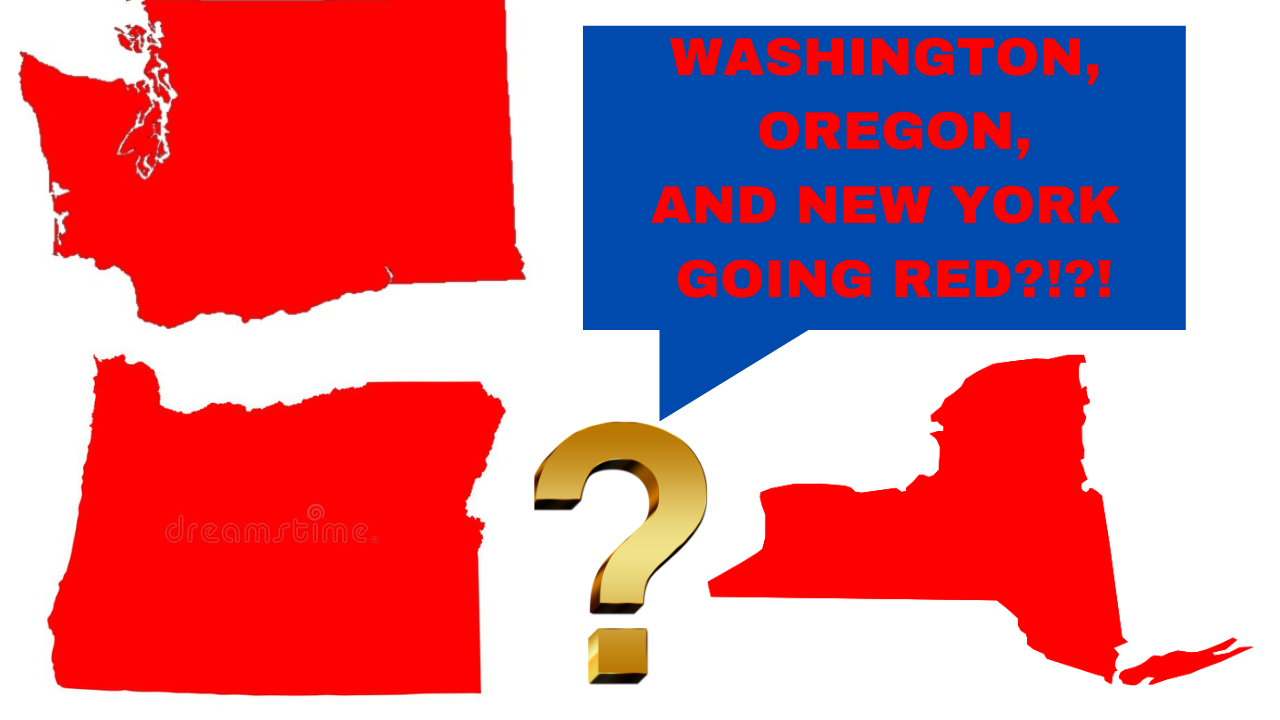 If I told you we were looking at a potential Red Oregon in 2022 just a few months ago you would have called me insane. NOW, however, that isn’t even the half of it! We are looking at potential Republican victories in statewide races in New Hampshire, New Mexico, Oregon, WASHINGTON, and even NEW YORK STATE! That’s right folks the Biden regime’s failures both economically at home and militarily abroad as well as the sheer inability of Democrats to field a likable or even competent candidate have created a PERFECT STORM! As ultra MAGA candidates like Kari Lake and Blake Masters in Arizona capture the hearts and minds of the nation, forgotten patriots, independents, and even the occasional “common sense” democrat, have felt emboldened in even the bluest of states! We will go through some of these races, the latest polling, and more as November 8th FAST APPROACHES!

Let’s start with some of the usual swing states that have swung HARD to the right as the election closes in and Dems continue to collapse. Ohio, once the swing state of all swing states, is now a SOLID red state. JD Vance is poised to DESTROY his fake moderate opponent Tim Ryan as the RCP average has him well ahead in most polls with the latest showing Vance over 5 points ahead! The state of Arizona is poised to give victories to some of the greatest America First candidates running this election! Kari Lake, who is able to take on the lying media like no one since President Trump himself, is SURGING ahead of her weak candidate for AZ Governor with latest polls showing an 11 point lead! Perhaps even more of a lightning rod, Blake Master has closed the gap and is now TIED with globalist NASA shill Mark Kelly to take back one of Arizona’s Senate seats. With America First candidates for Sec. of State and Attorney General Mark Finchem and Abraham Hamadeh (election and border PATRIOTS) set to join Kari Lake’s administration, Arizona has truly atoned for its years of sending John McCain to Washington!

If you like open borders, high prices, and violent crime, then Mark Kelly is your guy. But if you think you and your family deserve better, send me to the U.S. Senate. pic.twitter.com/Xks7FDS25p

As John Fetterman collapses in Pennsylvania it becomes clear that Dr. Oz will be Pennsylvania’s next Senator. Unfortunately, the real America First candidate, Republican Governor nominee Doug Mastriano, is still a few points behind current PA Attorney General Josh Shapiro. Mastriano has closed the gap INCREDIBLY despite receiving no money from the RNC, but we NEED Pennsylvania Patriots to come out and vote for Doug, even if you can’t stand to vote for Oz at least show up for Colonel Mastriano. Josh Shapiro supported lockdowns, enforced vaccine mandates, and funded drag queen events for kids. TAKE BACK PENNSYLVANIA! Pennsylvania does have historic issues with Republican statewide polling so expect Doug to outperform regardless, but he is likely the most vulnerable of the lean red swing states, we NEED Doug in Harrisburg!

Wisconsin (Senate and Governor) and Georgia seem set to go Republican so let’s turn our attention to some of these possible upsets. Polls have been going crazy in these two weeks before the election and it appears we could see Republican flips in some unlikely places. Regarding the Senate: Don Bolduc is now ahead of Democrat swamp creature Maggie Hassan in New Hampshire, Patty Murray (who has been destroying America piece by piece in the Senate since 1993) is barely 4 points ahead of her Republican challenger in DEEP BLUE WASHINGTON, and in Nevada Adam Laxalt is leading in the majority of polls against the incumbent in what used to be a reliably Dem seat!

For Governor seats there are just as many fireworks! Oregon, you heard that right the People’s Republic of Oregon, is projected to get its first Republican Governor since 1987! Christine Drazan is up almost 2 points in the RCP average in a three way race with a third party actually stealing votes from the DEMOCRAT! The State of New York is currently rated as a “Tossup” by RealClearPolitics and shows unelected incumbent Kathy Hochul with less than a 5 point lead over Lee Zeldin. New Mexico is an even closer race for Governor with Mark Ronchetti rallying disaffected Dems and Hispanics within 4 points in the RCP average! Tudor Dixon is only 3 points behind lockdown lover Gretchen Whitmer in Michigan and Republican Challenger Scott Jensen is within 5 up in Minnesota! If Republicans win even one of these races it will be huge but there is a chance they could ALL be swept in the impending red tsunami!

Republicans are poised to get at least 54 seats in the Senate, control well over 32 Governors seats, and obtain a sizable majority in the House of Representatives. This will mean nothing if we the people do not make our voices heard and demand real governance. We can’t let this red wave turn in to another extended term for Mitch McConnel to sell American industry and get us involved in more foreign wars with his Democrat friends in the White House. We demand nationalism. We demand a closed border. We demand investigations and trials for those who locked us down and forced vaccines. We demand an end to the adventure in Ukraine and the inevitable path of war with Russia and China our military and diplomatic leaders are putting us on. It starts with winning these midterms, but that is truly just the beginning.

US tax money does to Ukraine,
Ukraine launders money back to US politicians,
that voted to give US tax money to Ukraine. pic.twitter.com/4dma7xa2YH