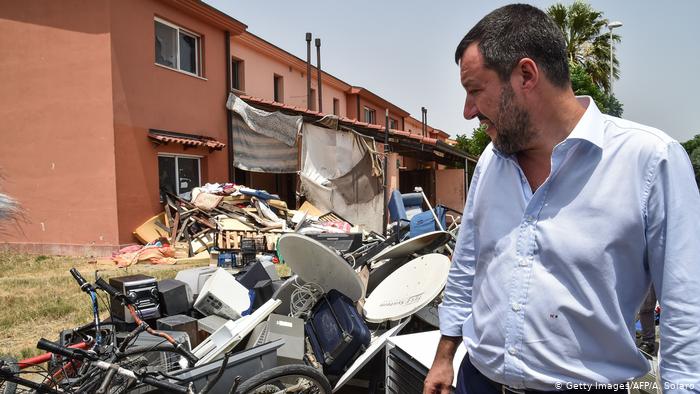 Well, the one and only Matteo Salvini has done it again; the Deputy Prime Minister of Italy has officially closed what was until just a few days ago the single largest migrant center in all of Europe. The Mineo center, which is located on the island of Sicily, and was once a US military base, became a major, indeed THE major holding facility for migrants entering into Europe. At its peak, it was housing more than 4 thousand migrants. Well as of just the other day, the center has been officially shut down, it is no longer going to be in use, and this is because of the astonishing success that Matteo Salvini has had in closing the borders of Italy; Italy of course being the main entry for migrants crossing the Mediterranean from North Africa into Europe, the results speak for themselves. We have to remember that before Salvini came into power, Italy was being literally overrun by migrants. I mean the figures are simply astonishing.

Back in 2014, this is even preceding the migrant crisis of 2015, but back in 2014, there was a huge jump in the number of people entering Italy from North Africa. I do not know how many of you know this but the migrant total entering into Italy went from 42,000 in 2013 to an astonishing 170,000 in 2014. It quadrupled in a single year and it did not stop, migration reached a peak of 181,000 in 2016. And it was not just the whole issue of people flooding the country, it was also the tragedy of 5,000 people drowning in their attempts to make the crossing, that is how many died in 2016 alone in just one year! So Salvini campaigned on the insanity of this, and said if you elect me and my party, Lega, this insanity stops once and for all, which of course Italians did. They voted in the Lega Party, who in turn formed a coalition government with the populist Five Star, and Salvini became deputy prime minister as well as minister of the interior, overseeing migration and border enforcement.

And do you know what he did? This is Salvini, in a single year, literally in a matter of months, Salvini reduced the amount of migrants entering Italy from a high of 181,000 to a mere 3 thousand so far this year. They have gone from 180 thousand to a mere 3 thousand under the one and only Matteo Salvini. And as part of that achievement, Salvini live streamed his visit to the Mineo migrant center, now empty. So he live streamed his walkabout tour of the empty facility to show off the effects of his border security policies. By the way, this live streaming that Salvini does, this is all part of why he is so popular. Italian politicians have tended to be aloof, very separated from the people. Salvini is the complete opposite, he is an amazing politician. He is been called the king of Facebook. If Trump is the king of Twitter, Salvini is the king of Facebook. One estimate had him posting about 10 times a day. Keep in mind, your average Italian politicians is posting maybe, MAYBE a few times a week. Salvini posts more in one day than his political opponents do all week. He has nearly 4 million Likes on his page and it all plays into the fact that he is very, very approachable and personally delightful; you will see him shaking hands and taking selfies with these massive crowds the form around. I saw it myself when I was in Verona, which is the heart of Lega country. So Salvini has achieved this perfect persona of being a very real tough guy, but with a heart. He will shut down migrant facilities and turn away migrant ships that want to dock at Italian ports, and then he would be seen smiling and joking and hanging out with people on the streets, and he just looks like this humble guy who wants to be your friend, that is sort of the genius of Salvini.

But what is REALLY his genius is his political sense. We have to remember that Salvini has taken a political party that up to just a few years ago, was on the brink. It looked like Lega was going to collapse, both politically and financially. When Salvini took over the party, it was barely getting four percent support in the polls. In a matter of five years, Lega went from 4 percent support to an astonishing 34 percent at the last European Parliament elections! And polls show their support has gone up even more since then. Remember when the Dutch-flagged ship called Sea-Watch carrying 42 refugees and migrants rescued off the coast of Libya defied a ban from entering into Italian waters and eventually forced itself to dock at an Italian port. The captain was arrested and the refugees were dispersed to other countries and the NGO behind the boat was levied a maximum fine. That act was condemned all over Europe, particularly in Brussels, but in Italy, the polls for Matteo Salvini’s party the Italian League actually went up during this whole ordeal, from 34 percent approval to 37 percent. Remember, in Italy, you need 40 percent to have a governing majority in the Italian parliament, and according to analysts from this market research agency, Lega could easily exceed 40 percent support. Salvini himself has a 60 percent approval rating, which I got to see first-hand when I was Verona, Italy, when he arrived to speak at the venue where we were having the World Congress of Families. I mean, he was like a rock star. It was literally like watching a rock star enter the building that crowds and pandemonium that surrounded him was unlike anything I have ever seen with a politician.

And there is a clear reason for this. Salvini recognized that the politics of the future is what scholars are calling post-security politics. Post-security politics is the increasingly popular response to the multiple contradictions inherent in globalization, the very globalization that is being so faithfully advocated by the elites in the EU and the Washington DC swamp. Globalism entails a number of dynamics that provoke significant insecurities and anxieties among global populations that globalism itself is powerless to resolve, and these anxieties are basically threefold: border insecurity, economic insecurity, and cultural insecurity. Border insecurity is provoked by globalization’s transnational dynamics that encourage mass immigration on the one hand and transnational corporations that have no loyalty to land, or culture, or ethnicity on the other. Economic insecurities are provoked by what is called a global division of labor, where industrial and manufacturing jobs are relocated into third world nations while capital and finance coalesce around the financial centers of urban areas, which in turn leaves rural populations out of the loop, as it were, the rural populations are experiencing mass unemployment in globalist economies. And cultural insecurities are felt by an overwhelming sense of an immigration invasion, where the cultures, customs, and traditions of a population are expected by the elites in Brussels to accommodate the immigrants rather than the other way around, as well as globalism’s narcissistic and consumer-based values replacing timeless customs and traditions.

And what we have to appreciate is that Matteo Salvini and The League or Lega have built their entire political platform on resolving precisely THESE THREE VERY INSECURITIES!!! Matteo Salvini has been not only advocating but in fact enforcing not just border security but actual and real immigration enforcement. Migrants arriving at Italy’s borders have in fact been shipped back to the Middle East and Northern Africa. Italy is effectively reducing its immigration epidemic. In terms of economic security, Salvini is putting forward the notion of a flat tax that would cut taxes and spur economic growth. And for cultural insecurities, Salvini has been celebrating the customary and traditional practices that comprise a unique Italian identity, along with calls for a rebirth of the Italian family and prolife culture to reverse Italy’s fertility decline. And what has been the result of all of this? The result is that the nationalist populist Lega and their coalition partner the Brothers of Italy are enjoying a soaring popularity. They dominated, they absolutely dominated the European Parliament election, and it looks like they are going to dominate their next national election.