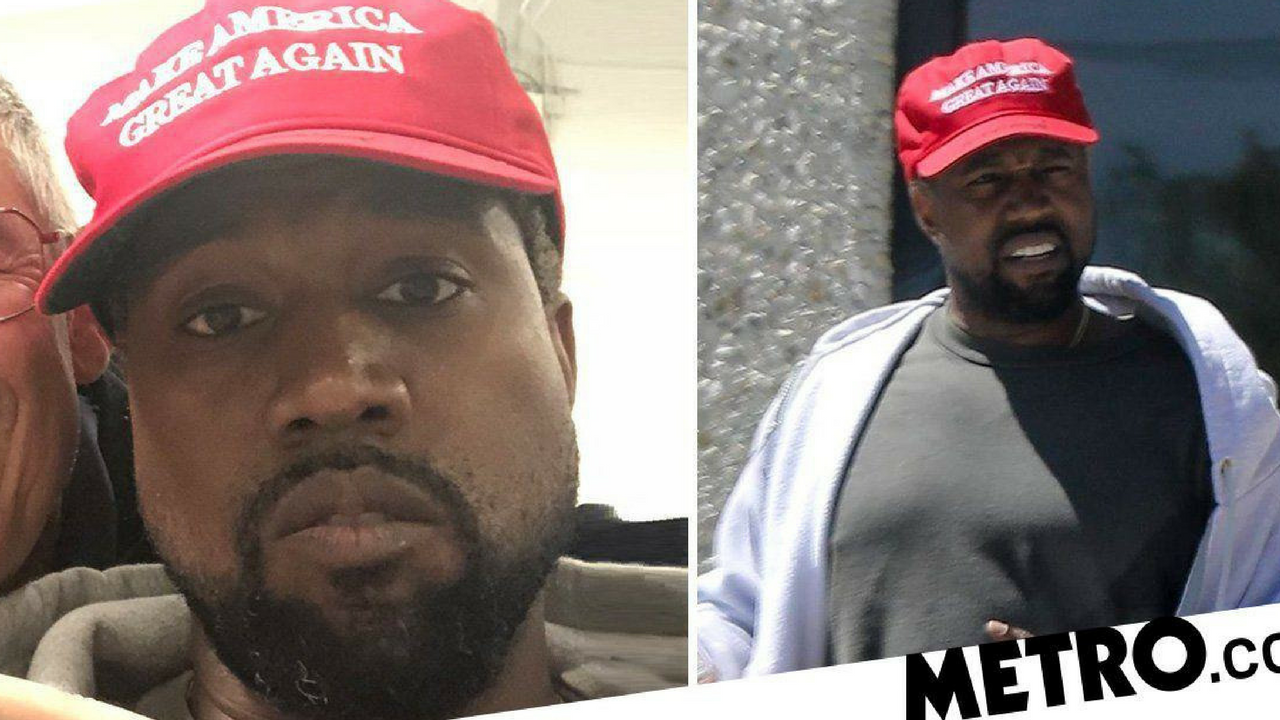 Well it seems that not a week can go by without the mega star Kanye West making news in some way, shape, or form, and boy has he ever this week! I am sure many of you have heard about the rapper’s tweets celebrating the presidency of Donald Trump and his support for him. The latest or one of the latest was a photo of him wearing a bright red MAGA hat, Make America Great Again hat, which he signed and took a picture of. This was just the latest in a series of very supportive statements for Donald Trump. Back in 2016, during a concert in San Jose, he said that though he did not vote in the election, if he did, he would’ve voted for Trump. He told Politico that he loved the way Trump was beating back political correctness. He has recently tweeted his support for Candace Owens, a black conservative, who has been very critical of Black Lives Matter. After he tweeted that he loved the way Candace Owens thinks, Roseanne Barr came out tweeted approvingly: ‘Bingo!’

Since then, Kanye has retweeted several videos of Trump supporter Scott Adams, the creator of the Dilbert comic strip, and responded by tweeted: “new ideas will no longer be condemned by the masses. We are on the frontier of massive change. Starting from breaking out of our mental prisons.”

Now, of course, this is not the first time Kanye West has stirred controversy. You may remember the incident with the MTV Video Music Awards back in September of 2009. Taylor Swift was giving her acceptance speech for Best Female Video, which was being broadcast live from Radio City Music Hall in NYC, when all of a sudden, Kanye West took to the stage and infamously interrupted her by grabbing the microphone out of her hand and declaring that it was in fact Beyonce who had one of the best videos of all time. Of course, he was booed off the stage, and West subsequently received a lot of flak. Even then-president Barack Obama called him a ‘jackass.’ Also some of you might remember when he was part of a concert raising money for relief efforts after Hurricane Katrina, where he claimed that George Bush does not care about black people. Obviously, West has always been outspoken. He has said that what he calls 'white publications' have no business writing about black music, he has tweeted his support of the alleged serial rapist Bill Cosby; I could go on and on.

But what is interesting here is that, when asked about all this stuff recently, Kanye West said he felt he was in some ways a ‘soldier of culture,’that was his term, in that he felt it was his duty or his role to say things that needed to be said, particularly in terms of what one scholar calls the ‘cultural politics of racial melodrama.’

I bring all of this up because I think West is, potentially at least, an important cultural indicator of a new phase in our history, the history of our nation. What we have to remember is that we are living in a time of mass transition; of course, that is what this web site is all about in analyzing; we are in the midst of a worldwide paradigm shift. And this paradigm shift involves a two-fold movement, we often refer to it as a dialectic here. On the one hand, you have the collapse of the modernist metanarrative, that scholars trace back to around the late 1970s; THAT is when scholars like Jean-Francios Lyotard and others began identifying the collapse of the modernist metanarrative. The modernist metanarrative basically believed that scientific rationalism represented the one true way of understanding reality for all peoples, times, and places. It is basically a one-size-fits-all metanarrative that calls all cultures, customs, and traditions, all borders and economies, to submit to its vision of reality. And what scholars have noticed is that this modernist vision of reality has collapsed; it has died. And as a result, populations are turning more and more to a kind of tribalism; turning towards their own ethnicity, culture, custom and tradition as the basis for social order in the absence of any metanarrative.

This is precisely the problem that Russian President Vladimir Putin faced when he assumed the presidency back in May of 2000. With the collapse of the metanarrative of Soviet communism, Russia itself was beginning to collapse, it was beginning to balkanize along ethnic and religious and geographic lines in such a way that scholars believed would have ripped the nation apart. And so, what did Putin have to do to save Russia? What was the only way he could save the country from completely splitting apart along ethnic, religious, and geographic lines? Well, he had to find a new metanarrative that could once again hold the nation together; to find a replacement for the kind of social glue that communism served as for so much of the 20th century. And that is the second of this twofold movement: you have the disappearance of one metanarrative, the liberal secular modernist metanarrative, but then you have the filling up of that vacuum with another alternative metanarrative. And Putin found it; he effectively replaced one metanarrative with another; Putin’s solution was in effect the retraditionalization offered by the Russian Orthodox Church; this was the conclusion of the scholar John Burgess; that the Russian Orthodox Church has basically replaced communism as the moral and ideological glue that holds Russia together today. This is the genius of Putin; he found a new paradigm, an alternative metanarrative that could hold Russia together; and it has been this rebirth of Holy Russia that has galvanized the hearts and minds of so many Russians; and the same thing goes for many other Central and Eastern European nations currently; they are returning to their historic Christian roots as the basis for a post-Soviet, post-communist social order that is able to hold their nation together and indeed offer a flourishing future. This is what we are calling the revitalization of Christian civilization.

As I’ve made the argument in my book, ‘President Trump and our Post-Secular Future,’ which I will link below for you, this is precisely the significance of Donald Trump. Now, of course, the US has a very different social and historical context than Russia; but we too are facing the death of our own version of the modernist metanarrative, and our nation – as I am sure you all are quite aware –  is ready to fracture and come apart as well. We see this particularly with the advent of cultural Marxism and the racial poison that it injects into our culture, which of course Kanye West has exemplified in the past, as I noted; I know cultural Marxism appears very strong on college campuses and on the media, but what you have to remember is that cultural Marxism is rooted in modernity; the modern myth of scientific rationalism. And that modern myth has died. While the fruits of the modern myth may continue to wreak havoc in the form of cultural Marxism, we can be assured that it is only a matter of time before the fruits begin to rot out as well. So I don’t think cultural Marxism has any future; not in the least.

By contrast, President Trump represents the ascent of a new metanarrative, a nationalist, populist, and traditionalist metanarrative that has the power to galvanize renewed loyalties and solidarities among the American population. One of the areas that it has the power to unite us in is in the area of race, a new racial paradigm as it were, and that is because it is a metanarrative of civic nationalism where the nation is itself a race. You see, from a civic nationalist perspective, the nation is a race; to be American is to belong to a national race of people. So in this sense, Trump speaks to whites, blacks, Hispanics, Asians, Latinos, all as Americans. As part of this worldwide nationalist blowback against the anti-cultural and detraditionalizing forces of secular globalization, we are seeing the redefinition of the notion of race; race is understood no longer in the identity politics of cultural Marxism, where races are divided up between those who have power, namely whites, and those who are disenfranchised and discriminated against, namely everybody else; No, instead, the solution to racial disparities is not the promise of power to minorities but rather in new and exciting economic opportunities inherent in a new political global order.

You see, the old cultural Marxist paradigm had races WITHIN the nation fighting against each other, this is key; the cultural Marxist paradigm defines race in such a way that there is conflict WITHIN a nation; whereas the new nationalist paradigm has races united AS a nation and fighting to maintain our border security and customs and traditions and national integrity as over against any other nation that would want to do us harm. Civic nationalism by definition wants to benefit ALL Americans, the American race, whereas the cultural Marxism of the race baiters wants to benefit by definition only SOME Americans, those who qualify as victims under the utter racist rubric of identity politics.

THIS I believe is what is galvanizing people like Kanye West and others to come out in favor of Trump. They are smart enough to see that if we go the way of cultural Marxism, we’re just going to collapse as a nation; there’s no way around that; we are going to completely balkanize. But if we embrace the nationalist, populist, and traditionalist vision that is galvanizing nations all over the world, then there is simply no stopping us. We become a united people, united under a shared culture made up of shared civic customs and traditions. So all of this is to say that once again, it appears that Kanye is grabbing the mic away from a speaker, but this time it is from the likes of the Al Sharptons of the world, the race baiters and cultural Marxists and politically correct Hollywood moral zombies that want to destroy our customs, traditions, and culture. Instead, Kanye is now defending a new metanarrative that promises to make America great again. Welcome aboard Kanye; it is great having you.

Please check up a book on President Trump by Dr. Steve Turley

President Trump and Our Post-Secular Future: How the 2016 Election Signals the Dawning of a Conservative Nationalist Age