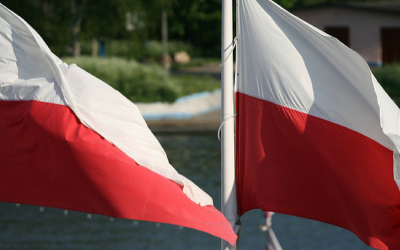 Alright, so President Trump has landed in Warsaw, Poland. Poland is the first nation he’s visiting on his way to the G20 meeting. And pundits have noted this to be a highly significant visit, not the least of which is a rather telling snub by Trump, of nations that are more historical allies such as Germany or France. But the current globalization utopia that’s being promoted by Merkel and Macron is of no interest to Trump; indeed, he outright detests it and seeks it collapse. And this of course emblemized in visiting Poland which in many respects is a paragon of a revitalized conservative traditional Christian nation along with a number of its neighbors.

Now there are some very practical and strategic components to this trip. First off, Poland in terms of its national security is a highly vulnerable nation. It’s been repeatedly invaded by its neighbors, like Germany and Austria, and of course it was under Soviet domination in its most recent past. And so Poland has joined NATO to form a strategic wall against any future imperial ambitions in Russia. And in fact, Poland is one of the few nations that has been faithful to the alliance’s requirement of countries spending at least 2 percent of their gross domestic product on defense. So, obviously a major visit from the President of the US solidifies Poland’s standing as a key member of NATO and serves to quell and aggressive ambitions, be they political, economic, or militaristic, particularly from Russia.

But Poland has also joined the smaller alliance known as the Visegrad Group, or the Visegrad Four, with Hungary, the Czech Republic and Slovakia. And to a certain extent with the exception of the Czech Republic, they’ve been together working very hard at fostering a revitalization of traditional Christian values in their respective nations as over against the secularized vision of liberal democracy being touted in Western Europe. Again, the Visegrad Group sees this retraditionalization as vital to their national security and the civilizational flourishing of their nations and indeed of European civilization as a whole. And so these nations have adopted a very strong form of nationalist populism as part of their governing coalitions both domestically and in their political alliances.

You may recall, we talked about this in an earlier video some months back, that Poland in November of last year officially recognized Jesus Christ as the King of Poland and called upon Him to rule over their nation, its people and their political leaders. This move is part of the retraditionalization and re-Christianization of Europe that has been going on in many parts of Central and Eastern Europe over the last decade, which has caused a tremendous rift with the rather militantly secularizing dynamics characteristic of Brussels and Western Europe in general.

And so, while Poland is a member of the European Union, its relationship with Brussels has been strained of late since the mass rise of conservative nationalist populism within Poland, particularly as of 2015 when the Law and Justice party, which is a conservative and somewhat anti-EU party, came to power. And while Poland continues to see membership in the EU as key to its foreign policy and national security, it certainly frustrates Brussels in terms of refugee admittance and the adoption of highly secular liberal human rights initiatives such as abortion on demand and the recognition of homosexual and transgender special rights status.

Now EU officials have threated to cut funding for Poland over what they consider to be Poland’s adoption of illiberal domestic policies and their rejection of what they call EU core values. And as the international think-tank Stratfor reports, while Poland is one of the fastest growing economies in Europe, EU funding is still an indispensable part of that economic growth, and is therefore a highly effective threat being used against Poland to liberalize its ways.

And this is why Western Europe is rightly quite nervous about Trump’s visit to Poland. Because in many respects Trump is recognizing by his visit not only the leadership role that Poland is playing now in Central Europe, particularly in relation to such nations as Lithuania, Estonia, Latvia, and the Ukraine, but also in confirming the US support of the conservative nationalist vision for Europe over against the secular liberal globalist vision of Merkel and Macron and Brussels. So the European elite are ironically warning Trump not to sew discord amongst European identity. I say ironically because that’s precisely what Brussels is accused of doing all throughout Europe, is sewing division and discord and dissonance as it seeks to impose a standardized one size fits all approach to economic and immigration and legal policy throughout the various nations.

So this visit to Poland I would argue is a wonderful move by Trump from the vantage point of the continued encouragement and success of nationalist populist movements throughout Europe. He is demonstrating that the nationalist vision of Europe is beginning to take on international recognition and support. And so, as it turns out, it’s not only national Poland that’s looking for international recognition, but nationalism as a wholistic global vision is seeking such recognition, with the US and Poland along with a number of other nations in Central and Eastern Europe comprising just such a mutual recognition.