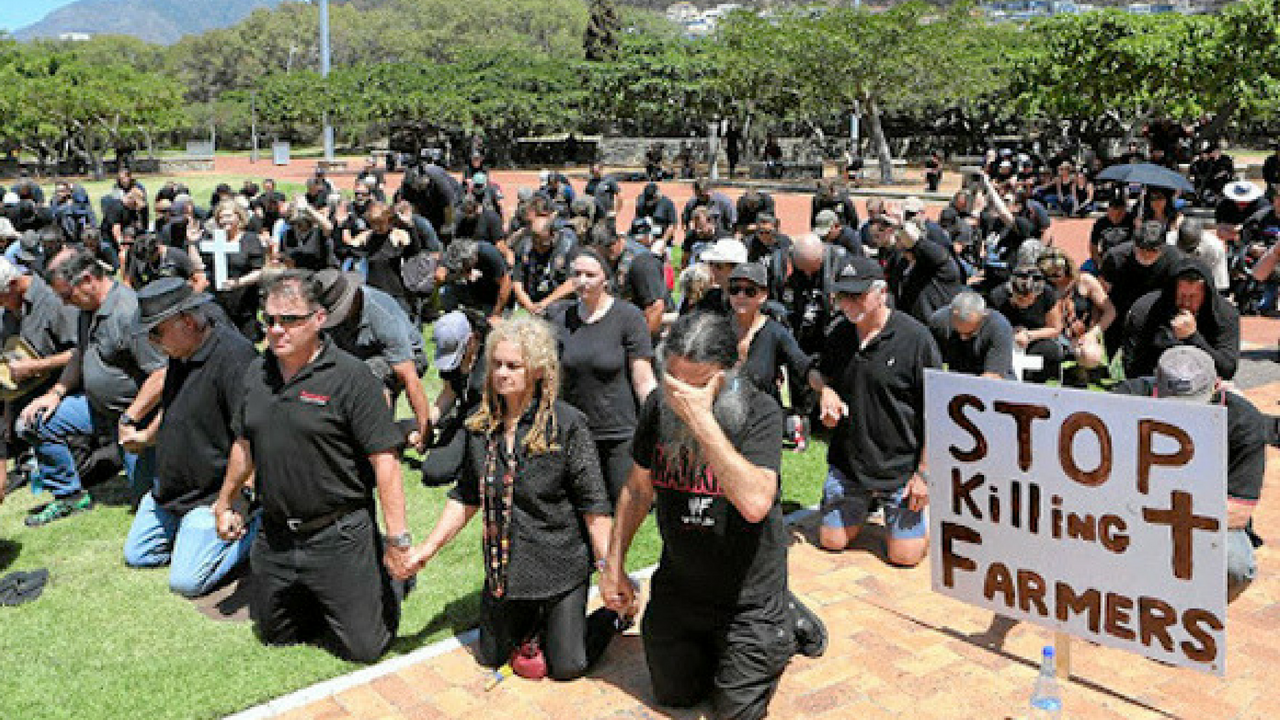 Russia is considering taking in up to 15,000 white South African farmers as their own nation begins to plunge into dangerous and violent tribalism.

I’m not sure how many of you have been following this development coming out of Russia and South Africa, but it is very, very interesting. Just a bit of background information here: One of the latest moves by the South African parliament was a recent vote in favor of a motion that will begin the process of amending the nation’s constitution to allow for the confiscation of white-owned land without any compensation to the farmers and landowners. And this measure was passed through the influence of the black Marxist leader Julius Malayma, who has risen as a serious presidential contender for the next national election. Malayma is a radical leftist populist who’s also a racial nationalist, and he’s been calling for the expropriation of white-owned farm land to be ‘returned’ as he puts it to black Africans. He has publicly advocated violence against white farmers. His racial rhetoric is pretty scary; if you go on YouTube, you will hear some pretty horrible words coming from his microphone; he was reported to have said that he was not calling for the slaughter of white people‚ at least not for now. This is scary stuff.

Needless to say, violence is in fact being directed more and more towards white farmers as symbols of South Africa’s apartheid legacy. We have statistics that indicate that white farmers are four times as likely to become victims of violence than your average South African citizen. There were over 400 farm attacks during last year alone, that’s more than one a day, which is four times the number recorded just a decade ago. And the 2018 figures are expected to easily top last year’s numbers.

Globally speaking, Australia has risen up and taken the lead here in terms of not just bringing awareness to this horrific racial injustice but also providing asylum for the farmers and their families. It was the first nation to come to the aid of these farmers by opened up to them, expediting their immigration requirements, and many of these farmers have indeed accepted the invitation; what is so revealing about all of this is that the population of white South African expats and immigrants is so high in Australia that it is led one Member of Parliament to compare the plight of white South Africans to that of the Syrians in their civil war; it is really that serious.

Now Russia is coming to the aid of these farmers. It’s been reported that Russia is in fact considering the offer of farm land in the south of Russia for upwards of 15,000 South African farmers. The farmland, as I understand it, is in Stavrropol, just above the Republic of Georgia, and interestingly a number of South African farmers have already settled there over the years due to this crisis. Already a delegation of Boers or these white South African farmers have come out to visit Russia, and the plan seems to be that they will start with migrating 30 families over to Stravropol and begin the processes of preparing for far greater numbers in the near future.

Of course, both Russia and South Africa share a lot in common: they both have European roots, they are both Christian, agrarian and agricultural, and so, even though certainly the language difference can be a significant hurdle for the settlers, Russia does offer nevertheless a very accommodating culture.

But these similarities underscore I think a more fundamental development going on here, and that is the ways in which we see nationalist, populist, and traditionalist sentiments creating new transnational solidarities and alliances. We are of course seeing this in Europe with the rise of the Visegrad Four, we are seeing a comparable partnership developing with the nationalist governments in Austria and Italy, we have actually just seen a very successful summit between Viktor Orban of Hungary and Prime Minister Bibi Netanyahu in Israel, where nationalist Hungary and really ultra-nationalist Israel are forging very strong strategic bonds. And of course, we are seeing the attempt of a new nationalist populist alliance between Russia and the United States, if the corporatist media and the cold-war infatuated deep state will ever get out of the way.

In the midst of all of this, we are seeing nations like Russia and Australia develop alliances of solidarity with South African farmers. What is so interesting here is the way in which Russia and Australia are similar in terms of their relationship to their respective nationalist right parties and policies; both nations have been able to rather seamlessly absorb nationalist values into their mainstream politics and policies. And so, the plight of white farmers in South Africa has not been left to the racial concerns of the nationalist right or the alt-right for that matter; they are certainly of course concerned. But because nationalist populist sentiments have weaved their way into the political mainstream in both Russia and Australia, (more so in Russia of course, Australia still has a hardcore secular left power base, where’s Russia’s leftwing has basically been decimated, as it has in Central and Eastern Europe) but both Russia and Australia are showing the promise of the kinds of solidarity and alliances that can be forged in an era of nationalism, populism, and traditionalism.

This is important because Secular globalists don’t give a rip about the plight of white farmers in South Africa. Remember, for them, for globalists, South Africa represents the triumph of the idealism of human rights and liberal democracy and social justice and the optimism and promise that these ideals hold for a peaceful and inclusive world. You will be hard pressed to find a single globalist elite showing a shred of concern for these white farmers; indeed I even read one writing for the ultra-liberal British paper The Guardian who just flat out denied that there is anything to be concerned about in South Africa, and he just went on to blame the racist alt-right for drumming up an artificial conspiracy and crisis.

When all is said and done, this is only because globalists like this writer refuse to recognize that this globalist triumph in South Africa is, to put it rather bluntly, completely and totally collapsing; it’s utterly falling part. As it turns out nation, culture, tradition, language, land, and yes, race matter; they really do matter to populations; and the whole attempt at trying to do social order apart from them in this globalist experiment is falling apart; it is collapsing into good old fashioned tribalism quite literally all over the world, and most especially in South Africa right now as we speak. These farmers are not going to find anyone in the globalist mindset willing to help them here.

But they are finding that nationalists and populists and their political allies are certainly willing to help them; they do understand the nature of culture, custom, tradition, land and ethnicity and the role they play in a national population; they see South Africa degenerating into tribalalist rot; they see it; and so Russia and Australia are most certainly reaching out and offering to provide sanctuary to these farmers as part of a world that is being reconfigured around nationalist and populist alliances and sentiments. We will certainly be keeping our eyes on how things develop in South Africa and the offers of sanctuary in places like Russia and Australia.