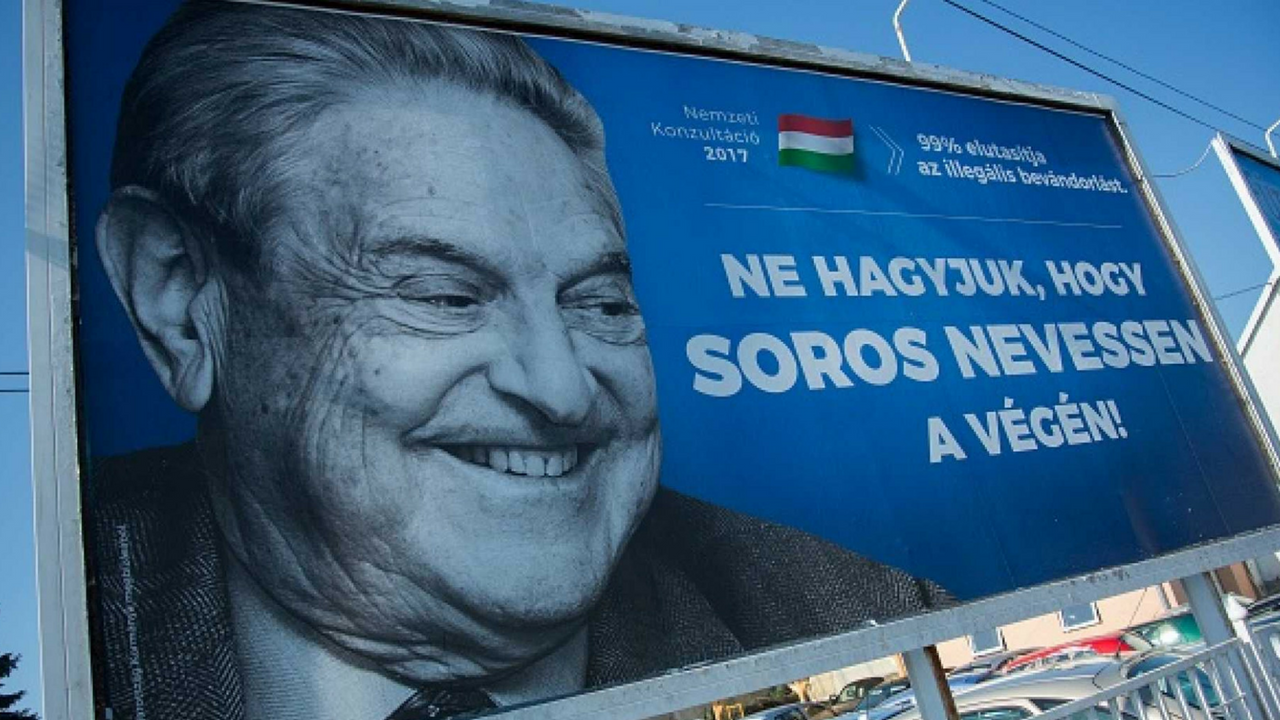 The New York Times is reporting that representatives of George Soros’ network of Open Society Foundations have indeed announced that it has become impossible to work in what they call the repressive atmosphere of Hungary and that they are picking up and moving their operations to Berlin.

Just some quick backdrop here. Hungary’s prime minister Viktor Orban won his third consecutive term, his fourth overall, in the elections held back on April 8th, and his Fidesz Party won a super majority in Parliament, which means that they now hold two-thirds of the seats in Parliament, and as such, they can basically do whatever they like, even change the Constitution of Hungary.

At the heart of Orban’s campaign, which we followed very closely here, was the whole issue of immigration and border security, and as part of his efforts to maintain border control, he promoted what is commonly referred to as the ‘Stop Soros’ law, which penalizes NGOs, nongovernmental organizations that seek to undermine Hungary’s border security in a number of ways and in effect flood the nation with immigrants and refugees. What this law mandates is that these NGOs would be required to obtain national security clearance, and if they are being funded by a source outside of the borders of Hungary, like George Soros’ money here in the United States, they would be required to pay a 25 percent tax on those contributions, which is of course more than most NGOs can bear. Orban does not play around; Hungary is going to secure its borders and if you are actively attempting to thwart that, then you are going to face some very stiff penalties. And the interesting thing here is that you can still do it; no one is technically stopping you from trying to open the borders up to mass migration, but if you do, then you are going to have to suffer the consequences of counter measures to secure the border.

As a result of Orban’s landslide win, the Times is reporting that as of Tuesday, roughly 100 employees of George Soros’ foundations have started packing up their offices, and it looks like they will be gone for good as far as Hungary is concerned in the next several weeks.

This announcement that Soros’ Open Society Foundation was moving out of Hungary was made just weeks after Soros’ Central European University announced that it was prepared to leave Budapest as well. If you are not familiar with THAT whole scenario, Central European University is a thoroughgoing leftwing university, it was founded in Budapest and financed by Soros, who is Hungarian, or at least he was born in Hungary. Our Hungarian friends love to remind me: Soros is NOT Hungarian; he does not share our values and our culture! Now what is so interesting is that the university is of course part of this extensive network of NGOs that are collectively Soros’ instrument to create a fully open globalist society in Hungary. Viktor Orban basically spearheaded an effort to revoke the university’s ability to issue accredited degrees, and of course, without the capacity to award degrees, the university collapses; the whole issue basically revolved around the notion, at least as I understand it, that Central European University was an American university but did not have an actual campus in the States, so it was seen as basically a shadow university; regardless, Orban basically told Soros: ‘Not here, my man, you can go create your open society somewhere else; don’t let the Hungarian door hit you on the way out’!

It does appear that the entire Soros web of NGOs based in Hungary has imploded; they are basically gone; they are in retreat; Soros actively took on Orban during the election, calling him an autocrat and anti-democratic, which of course is a bit odd to call someone during a democratic campaign. He accused Orban of lying about him and his Open Society and on and on. And in the end, of course, Soros lost. He did not just lose; he was, in electoral terms, crushed, utterly and totally defeated. So, with this official announcement on Tuesday, it appears that Soros has surrendered, conceding his defeat and leaving Hungary to set up camp elsewhere. It appears to be more and more likely to Germany, Berlin I believe. Let Germany have him; he and Merkel can mourn the death of their globalist world order together.

The New York Times piece is actually very, very instructive for us here, because it, in many ways, is a masterpiece in corporatist globalist propaganda in the way it presents the whole Soros scenario. Remember, our corporatist globalist elites are on Soros’ side; they’re cheerleaders for George Soros, and you can see it in The New York Times article. Let me give you some highlights from the piece to give you a sense of how they see the world here.

According to the Times, the Open Society Foundations promote and stand for “democracy, free expression and civil rights”. Those are three key terms. Let’s take a step back here and think through these three terms a bit. When the Times says that any organization is about ‘democracy, free expression and civil rights,’ you have to understand that those are code words for secular corporatist globalism. Let me show you what I mean.

First, they use the term ‘democracy,’ meaning that they stand for democracy. Now that is a little strange in that the Open Society Foundations are leaving precisely because of an election, a free, democratic election. But what happened in Hungary is not what they mean by democracy. Instead, what they mean is what globalists technically refer to as LIBERAL democracy. You see, Nigel Farage will advocate what he calls DIRECT democracy, or Orban will advocate what he calls Christian democracy, but Soros and The New York Times are advocates of LIBERAL democracy. So then, what is LIBERAL democracy? Liberal democracy, as the globalists use the term, refers to electoral process by which sovereign individuals are LIBERATED from traditional ways of life. This is absolutely key to understanding the ways in which globalists think. Traditional societies believe that every person born into the world is born into a moral obligation to conform their lives into a harmonious relationship with the divine meaning and purpose inherent in the world around us, whereas globalistic secular societies reduce the human person to a sovereign individual who has no moral obligations apart from that which one chooses for oneself. And so globalistic secular societies tend to be very hostile towards traditions, since traditional conceptions of say religion, gender, and sexuality are now considered unduly oppressive, intolerant, and unjust. The primary means by which one is freed from such oppressive traditions is through liberal democracy.

Of course, no society can live that way. Christian societies do not see mosques as every bit as legitimate architectural features in their urban landscapes as churches, and vice versa. No European citizen sees Middle Eastern immigrants are every bit as entitled to their land as they, the citizens of a nation, are. They do not believe that same-sex marriage is every bit as legitimate as traditional marriage and do not believe non-Western cultures are every bit as valid as Western cultures, and on and on. And so that leads to the third commitment of Soros’ empire, what they call civil rights. Most populations do not believe that values are relative, and so what are globalists going to do about that? How are globalists going to make sure that liberal democracies can successfully overcome the repressive traditions that dominate society? What do globalists have to do when faced with populations who refuse to see all lifestyles, all religions, all value systems, all customs, all traditions, as equally valid?

Well, my friends, this is where so-called civil rights come in. What the elite globalists do is they come in and begin to confer special legal status on all groups who claim that they have been discriminated against. They come in and begin implementing what is called emancipatory politics; emancipatory politics is a globalist-inspired political idea that basically re-envisions the state, the government, as a grand liberator or emancipator of individuals and groups from traditional social orders that are now deemed oppressive and discriminatory; and they are oppressive and discriminatory because they have the gall to believe that their customs, traditions, religions, and ways of life are more legitimate than those of minority populations. It is actually the job of a just government to bestow preferential treatment and special status on minority groups now considered oppressed or disenfranchised, and here is the key, AT THE EXPENSE of a nation’s historic culture, customs, and traditions. This is precisely what Viktor Orban has argued consistently over the last campaign. The moment you open your society to all customs, cultures, and religions in the name of democracy, free expression and civil rights, inevitably those alien customs, cultures, and religions will assert preferential status over the nation’s historic identity markers. Because those historic identity markers are now deemed oppressive and exclusionary, they will have to be changed, they will have to bend and adjust to the emancipatory norms of a specifically globalist vision of democracy and civil rights. Minority status always, always, always becomes a preferential status in globalist societies. Any semblance of equality is completely wiped away. THAT is what is meant by democracy, free expression, and civil rights.

But as Orban has pointed out, Hungary and populations all over Europe are increasingly recognizing that this globalist redefinition of society is simply replacing one set of cultural absolutes, traditional absolutes, with another set of absolutes. As far as George Soros is concerned, you are allowed to destroy all traditions and customs except for the tradition and custom of liberal democracy. THAT is the new absolute. You are allowed freedom of expression as long as that freedom of expression does not OFFEND the newly protected political class. You do that, then you yourself will be verbally stoned; you will be called hateful and bigoted and homophobic, you can get sued, and you’ll get sued because of civil rights! Civil rights allow protected minority groups to impose their will on you; and so you can be sued or fired if you refuse to call somebody by their gender pronoun or if you are culturally insensitive or whatever. You see, we are not being liberated from anything; in fact, secular liberal globalism is nothing more than a cultural imperialist, totalitarian, absolutist political and economic system that more and more of the world’s population wants absolutely nothing whatsoever to do with.

And THAT is why Viktor Orban won in a landslide; THAT is why George Soros, the prince of globalists, is in retreat; and THAT is why Hungary and Hungarian culture will flourish for generations to come.