Steve Bannon and the Civil War in the Catholic Church!!! 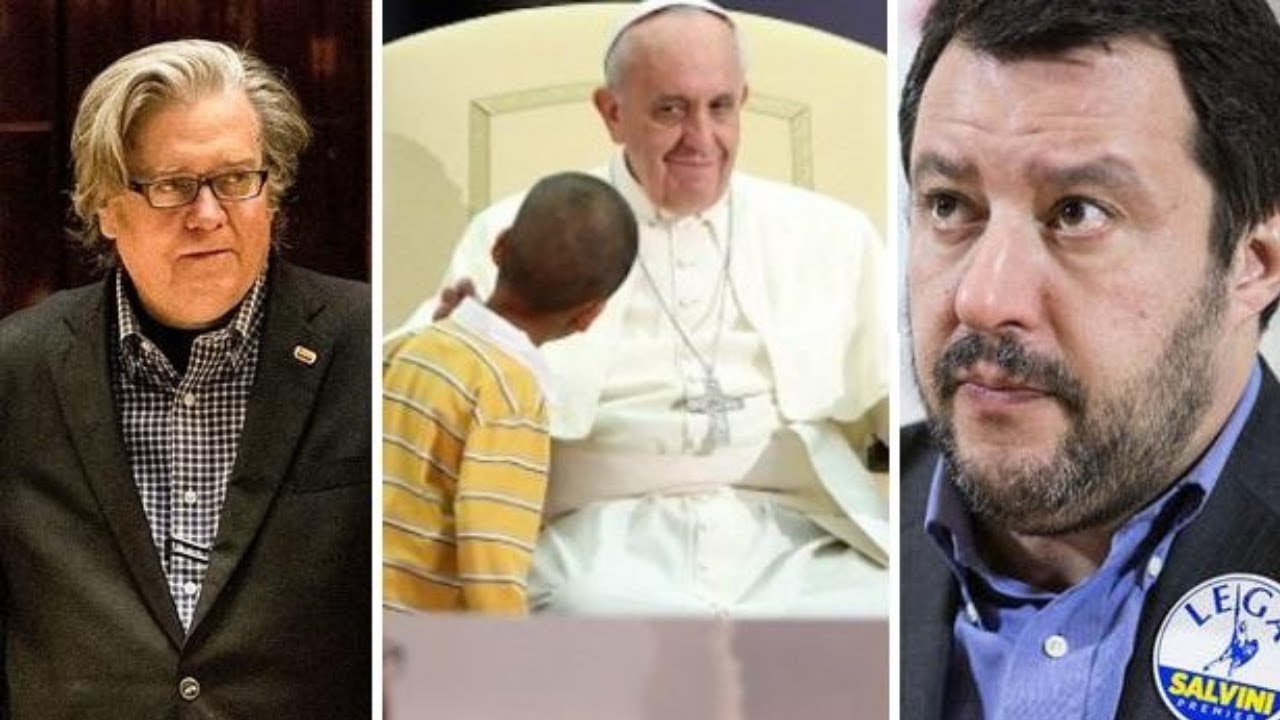 I am sure you are all familiar with the former Trump adviser and chief strategist Steve Bannon; he was of course the former head of Breitbart News and was instrumental in helping to orchestrate Donald Trump’s successful presidential campaign. Since resigning from Trump’s administration and Breitbart news, Bannon has been setting his sights on Europe and the European Union. He recently announced the creation of a Brussels-based political organization that really has one single purpose: to undermine and ultimately paralyze the European Union. He is calling the organization ‘The Movement’ and his vision is to see it as a clearing house of sorts for the nationalist populist movements going on throughout Europe. He wants this to be a centralizing organization that recruits and promotes European political candidates who will stand up for national sovereignty, border control and security, jobs and economic nationalism, and a return to tradition and the honoring of national customs and cultures.

In the process, Bannon has set his sight on a new target in his campaign against globalization. And that target is none other than the current pope, Pope Francis. According to Bannon, who is himself a practicing Catholic, Pope Francis is one of the most pernicious forces behind the legitimation and promotion of globalism and globalization throughout the world. Francis has consistently blamed nationalist populists for the faults of the world. In particular, the Pope has stood against Matteo Salvini and the rise of the Italian League and the Brothers of Italy, referring to them as examples of an age-old temptation to give in to a xenophobic hatred of the other and to discriminate against the poor and the destitute. Pope Francis has warned that the nationalist populist movements in Europe could lead to a repeat of the conditions that led to World War II, even though not single scholar of the nationalist right would concur with that warning. Scholars who actually study the nationalist populist right recognize profound differences; indeed the fundamental differences between the nationalist right and the imperialist aims and projects of Nazi fascism, which ironically are more akin to globalism than they are to anything resembling contemporary nationalist populist agendas.

So what Bannon is doing here is, again, as a practicing Catholic, he is calling out what he sees as secular globalized influences within the Catholic Church and in effect calling on all conservative forces within the church to openly and intentionally resist these globalizing influences. It appears that he is achieving a certain level of success in doing so. A number of Catholic leaders, particularly the St Louis Cardinal Raymond Burke who was actually demoted by Francis and has called for the Pope’s resignation, they are arguing that Francis’ rather cavalier attitude towards the horrific sex abuse scandals that have rocked the church throughout the world risk actually financially bankrupting the church. We are talking the very physical and financial apparatus of the church very possibly collapsing as a result of the legal ramifications of the sex abuse scandal that pervades the church. Bannon and conservative traditionalists believe that this is now the time to completely revamp the church in a far more conservative and traditionalist mode, which appears to be the view of the former traditionalist pope, Pope Benedict, who indicated in a letter outlining his views on the sex abuse crisis that this was the time to redesign the church in response to this sexual perversion. The assumption here is that such a redesign involves an intentional retraditionalization that was part of Benedict’s tenure.

That certainly appears to be Bannon’s plan. I do not know how many of you know but Bannon is currently involved in setting up a nationalist populist Catholic institute in Italy, just outside of Rome, which aims at cultivating and stimulating conservative thought within the church. Cardinal Raymond Burke is president of the Institute’s board of advisers, and he sees the institute as essential for the defense of Christian civilization against the onslaught of globalism but particularly as it is coming from the Vatican. Bannon is organizing what amounts to the connective tissue of various nationalist populist political organizations throughout Europe with his so-called ‘The Movement’ organization, and he is also behind the creation of a nationalist populist institute that seeks to influence particularly Roman Catholic forces in a more nationalist populist anti-globalist direction. It is pretty impressive stuff, without question.

What I think we are seeing in all of this is the dialectic that we so often talk about on this channel coming to the fore from within the church; whether it is traditionalist vs. modernist forces within the Catholic church, or the current Ukrainian crisis facing the severing of the Ukrainian church from the Moscow Patriarchate and the subsequent excommunication of the Patriarch of Constantinople, or simply liberal churches vs. conservative churches in the United States, Canada, and Europe. There is little question that the globalist-nationalist divide has made its way into the Christian church. We have talked about this on a number of occasions. What is fundamental to understanding the world today is a massive clash; a dialectic between globalization and secularization on the one side and nationalism and populism and traditionalism on the other. The key to understanding the world stage at the current moment is that we are experiencing nothing less than a crisis in modernity; that is the enshrinement of scientific rationalism as the one-size-fits-all way of knowing the world, which dominated the 20th century and was the philosophical roots of the three major political, economic, and cultural systems such as liberal democracy, communism, and fascism . The problem we are facing today in the 21st century is that no one believes that scientific rationalism is the one true way of understanding reality anymore. Populations are what we call POST-modern today, no longer modern. But even although modernity has been largely rejected, that is not stopping Western elites [in politics, corporations, film, art, music, entertainment] from exporting the fruits of modernity in the form of globalization, in the form of a one-size-fits-all political, economic, and cultural system for all peoples, times, and places. And so, there is a massive blowback going on all over the world against secularist globalism, where populations are once again reasserting their nation’s customs, cultures, traditions, and religions as mechanisms of resistance against globalization’s anti-cultural dynamics and its secular, elite aristocracy. There appears little question that we are seeing this clash play out everywhere and most particularly from within the church. There are now modernist forces in the Catholic Church that are more and more being challenged by rising traditionalist forces and they are growing by the day. Steve Bannon is absolutely right in seeing the Catholic Church as ground zero for this nationalist populist renewal.

Of course we will be keeping our eyes on how things develop here, but my sense is that Francis is a bit of a last hurrah for globalist modernist liberal forces within the Catholic Church. I think it is just a matter of time before the traditionalists take solid control over the church and begin instituting the necessary reforms that align the church with a more POST-modern and traditionalist sentiment that hopefully will see it through its current crisis.