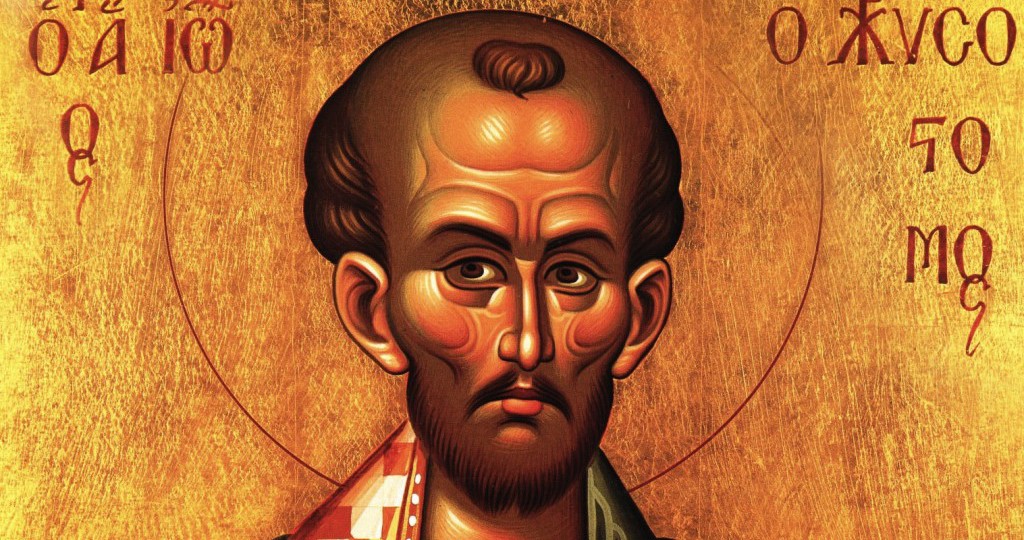 In the year 386 AD, the same year that Augustine converted to Christianity, John Chrysostom preached to his Antiochene congregation what is considered the first Christmas sermon. Few sermons since have captured the profundity of the Incarnation. Enjoy!

Behold a new and wondrous mystery. My ears resound to the Shepherd’s song, piping no soft melody, but chanting full forth a heavenly hymn. The Angels sing. The Archangels blend their voice in harmony. The Cherubim hymn their joyful praise. The Seraphim exalt His glory. All join to praise this holy feast, beholding the Godhead here on earth, and man in heaven. He Who is above, now for our redemption dwells here below; and he that was lowly is by divine mercy raised.

Bethlehem this day resembles heaven; hearing from the stars the singing of angelic voices; and in place of the sun, enfolds within itself on every side, the Sun of justice. And ask not how: for where God wills, the order of nature yields. For He willed, He had the power, He descended, He redeemed; all things yielded in obedience to God. This day He Who is, is Born; and He Who is, becomes what He was not. For when He was God, He became man; yet not departing from the Godhead that is His. Nor yet by any loss of divinity became He man, nor through increase became He God from man; but being the Word He became flesh, His nature, because of impassability, remaining unchanged.

And so the kings have come, and they have seen the heavenly King that has come upon the earth, not bringing with Him Angels, nor Archangels, nor Thrones, nor Dominations, nor Powers, nor Principalities, but, treading a new and solitary path, He has come forth from a spotless womb.

Since this heavenly birth cannot be described, neither does His coming amongst us in these days permit of too curious scrutiny. Though I know that a Virgin this day gave birth, and I believe that God was begotten before all time, yet the manner of this generation I have learned to venerate in silence and I accept that this is not to be probed too curiously with wordy speech. For with God we look not for the order of nature, but rest our faith in the power of Him who works.

What shall I say to you; what shall I tell you? I behold a Mother who has brought forth; I see a Child come to this light by birth. The manner of His conception I cannot comprehend.

Nature here rested, while the Will of God labored. O ineffable grace! The Only Begotten, Who is before all ages, Who cannot be touched or be perceived, Who is simple, without body, has now put on my body, that is visible and liable to corruption. For what reason? That coming amongst us he may teach us, and teaching, lead us by the hand to the things that men cannot see. For since men believe that the eyes are more trustworthy than the ears, they doubt of that which they do not see, and so He has deigned to show Himself in bodily presence, that He may remove all doubt.

Christ, finding the holy body and soul of the Virgin, builds for Himself a living temple, and as He had willed, formed there a man from the Virgin; and, putting Him on, this day came forth; unashamed of the lowliness of our nature’. For it was to Him no lowering to put on what He Himself had made. Let that handiwork be forever glorified, which became the cloak of its own Creator. For as in the first creation of flesh, man could not be made before the clay had come into His hand, so neither could this corruptible body be glorified, until it had first become the garment of its Maker.

What shall I say! And how shall I describe this Birth to you? For this wonder fills me with astonishment. The Ancient of days has become an infant. He Who sits upon the sublime and heavenly Throne, now lies in a manger. And He Who cannot be touched, Who is simple, without complexity, and incorporeal, now lies subject to the hands of men. He Who has broken the bonds of sinners, is now bound by an infants bands. But He has decreed that ignominy shall become honor, infamy be clothed with glory, and total humiliation the measure of His Goodness.

For this He assumed my body, that I may become capable of His Word; taking my flesh, He gives me His spirit; and so He bestowing and I receiving, He prepares for me the treasure of Life. He takes my flesh, to sanctify me; He gives me His Spirit, that He may save me.

Come, then, let us observe the Feast. Truly wondrous is the whole chronicle of the Nativity. For this day the ancient slavery is ended, the devil confounded, the demons take to flight, the power of death is broken, paradise is unlocked, the curse is taken away, sin is removed from us, error driven out, truth has been brought back, the speech of kindliness diffused, and spreads on every side, a heavenly way of life has been ‘in planted on the earth, angels communicate with men without fear, and men now hold speech with angels.

Why is this? Because God is now on earth, and man in heaven; on every side all things commingle. He became Flesh. He did not become God. He was God. Wherefore He became flesh, so that He Whom heaven did not contain, a manger would this day receive. He was placed in a manger, so that He, by whom all things arc nourished, may receive an infant’s food from His Virgin Mother. So, the Father of all ages, as an infant at the breast, nestles in the virginal arms, that the Magi may more easily see Him. Since this day the Magi too have come, and made a beginning of withstanding tyranny; and the heavens give glory, as the Lord is revealed by a star.

To Him, then, Who out of confusion has wrought a clear path, to Christ, to the Father, and to the Holy Ghost, we offer all praise, now and for ever. Amen.

This Christmas, make sure to sign-up on our email list and get your FREE ebook: The Face of Infinite Love: Athanasius on the Incarnation.