The Rise of Exorcisms and Our Post-Secular Age 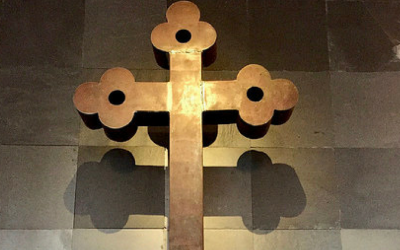 On the Drudge Report today, it featured the headline: ‘People are Getting Exorcisms Instead of Going to the Doctor,’ and it linked to an article written from a highly skeptical perspective; it is actually on James Randi’s site, who is a notorious paranormal skeptic. The article trends along the lines of Drudge’s headline, that either you are going to get exorcisms or you are going to avail yourself of modern medical treatment. It is your quintessential fact vs. faith dichotomy that is the hallmark of secular thinking. Secularism or secularization is comprised of a science vs. religion dichotomy where it is argued (and hardly in a scientific fashion by the way) that science and religion occupy fundamentally different social and intellectual domains: science deals with the empirically verifiable while religion is purely speculative and subjective. And this science vs. religion dichotomy actually develops into a number of other dichotomies, such as nature vs. culture, public vs. private, and as noted fact vs. faith.

Now reading through this highly secular article, I couldn’t help but notice the strange irony infused throughout the piece, in that a number of scholars have observed that the rise of exorcisms that we’ve seen over the last few decades actually indicates the falsification of what’s called the secularization thesis. The secularization thesis was popularized by sociologists such as Emile Durkheim and Max Weber at the beginning of the twentieth century, and they basically argued that the more educated and technological our societies get, the less religious they will be, and they related this particularly to Christianity; it was postulated that a combination of younger generations and higher education would basically wipe out historic Christianity.

And this was the dominant paradigm in sociology for most of the twentieth-century. And we still hear it today; we still read articles like this one exorcism that science and religion have nothing to do with each other, or that the more educated a person is the less likely they are to be a religious fanatic, and so on. This is the secularization thesis.

But scholars are increasingly abandoning this thesis; one could actually argue you’ll have a hard time finding a sociologist or cultural anthropologist that gives this thesis the time of day. Look at what you had at the end of the twentieth century, the century that was supposed to set the timeframe for the demise of historic religions: in the late 70s you had the Khomeini revolution and Iran officially transforming into a theocracy; you had the Reagan revolution and the ascent of the Christian Right in America politics; you had the assassination of Anwar Sadat by Islamic militants in 1981. You have Orthodox Jews growing from basically a fifth of Israel’s population to over a third. You have Pentecostalism exploding throughout South America, Africa, and Asia, with estimates that the worldwide Pentecostal population will reach by the end of this century over one billion. Well, so much for the demise of religion.

And another feature of a historically religious worldview that not only stubbornly persists but is actually increasing in belief and practice is that of exorcisms. According to the research conducted by Italian scholar Giuseppe Giordan and the Australian scholar Adam Possamai, what secularization theorists never even imagined has actually come to be. According to Gallop polls, belief in the devil and the demonic and malevolent spirits in the US has increased from 55 percent in 1990 to 70 percent in 2004.

What’s so interesting here is that while belief in possession and exorcism actually waned among the mainline churches in the twentieth century, such as the Episcopal or Anglican churches, it’s made a comeback largely through the New Age movements and the fascination with the paranormal as we see on television shows like ‘Ghost Hunters’ or ‘Ghost Adventures’ and the like. The irony in all of this is that professional exorcists, for lack of a better term for those who have actually been formally ordained to perform exorcisms, these professional exorcists argue that the fascination with non-human or demonic entities among the general population and paranormal enthusiasts has actually made many more people far more vulnerable to Satan’s attacks, since they really do not know what they are getting into with all of this. Belief in the modern world is hardly waning; everywhere we look throughout the media we can see horoscopes and psychics and new age healers and what are called mediums, people who can talk to the dead, and in movies such as the The Exorcist or The Conjuring that popularized the work of Ed and Lorraine Warren, all demonstrate that the supernatural is more alive and well in the modern age than it has ever been. But without the appropriate theological knowledge for such, people can in fact end up highly vulnerable to malevolent entities.

And certainly, one’s relationship to the Christian church does affect one’s views, even though belief in the demonic does transcend such church commitments. Data collected from the Baylor Religion Survey taken in 2005 indicates that church participation appears key in one’s view towards the devil. If there is a high level of church participation, then we see no noticeable difference between different social classes and educational levels (there is a generally homogenous view towards the satanic); whereas if there is no church commitment, then the social and educational discrepancies kick in, they evidence a difference of opinion on the satanic. We found too that belief in possession differs geographically; so for example among those born and raised in the South, 60 percent believed that people could be possessed by the demonic, and among regular church attendees, that number rose to about 80 percent. Interestingly, Republicans were far more likely to believe in demonic possession than were Democrats, which I affectionately refer to as Demoncrats, and Protestants were more likely to belief than Catholics.

Now we do not want to be too hard on the secularization thesis; it did once have some plausibility to it. As we entered into the modern period, cases of exorcism still existed by they declined dramatically. And as these scholars have pointed out, this was the case for both clergy and laity: it was not just the average Joe on the street that did not believe in ghosts and spirits and demons anymore, neither did the clergy; priests did not believe in it anymore! It seemed that in the advent of the Age of Reason, everyone agreed that science and modern medicine could explain everything. And this is where you see the emergence of the mainline mentality; that religious faith was fundamentally existential, it had to do solely with personal meaning and the individual pursuit of purpose, really nothing more; religion was certainly not about understanding objective reality. And so, of course the secularization thesis appeared rather plausible if not inevitable; the more educated and technologically advanced a society or population, the more historic religious beliefs and practices would wane.

However, we are witnessing nothing less than a mass reversal of this trend throughout the Western world. The Vatican in particular has evidenced a renewed interest in exorcism and forging a new generation of ordained exorcists, forming the International Association of Exorcists, which now has 250 exorcists in 30 different countries. The diocese of Milan, which is one of the largest diocese in the world, has more than doubled the number of exorcists in the last 10 years. They actually now have a hotline, a specific telephone number, where there is a person available to address any concerns people have regarding the satanic and the availability of an exorcist. And according to some Catholic statistics, over a half million people in Italy undergo an exorcism per year.

Among Pentecostals, we are seeing a rise of what are called charismatic deliverance ministries, inspired by exorcist Bob Larson. And even the highly liberal Anglican Church in the North has seen the current fascination with ghosts and hauntings as a means by which the church can remain relevant in British society. God knows the Anglicans have destroyed everything else historically Christian, except their music, that is still quite beautiful.

And so all of this is to say that the article that the Drudge Report linked to evidences precisely this discrepancy between a stubborn secularization that refuses to acknowledge any blending of religion and science on the one hand, and the far more stubborn persistence of religion in the modern world that calls into question such a dichotomy between religion and science. The fact is that the popularity of exorcisms today are but one of a whole host of indicators that evidence that we are entering into what scholars call a postsecular era, one in which the dichotomies of the past century such as religion vs. science or nature vs. culture are collapsing everywhere we look. And so the great irony in all of this is that it appears that the secularization thesis and its assumptions about the waning of religion that has possessed so many intellectual minds over the past century are going through their own form of exorcism, being more and more expunged from the life of postsecular academic scholarship.