Viktor Orban's Fight Against George Soros and the EU 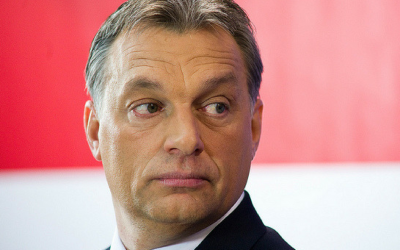 Hungarian Prime Minister Viktor Orban continues to demonstrate that he is on the front lines in the worldwide battle against the anti-cultural processes of globalization and its secular aristocracy.

Orban has been on an anti-George Soros campaign of late; Soros is of course Hungarian, and reports are that the streets of Budapest have been saturated with posters and billboards depicting this secular globalist billionaire with the caption “Don’t let Soros get the last laugh!”

Now the poster campaign follows a series of moves by the Hungarian government to basically stop Soros’ operations in the country. Hungary is arguing that Soros is attempting to initiate a mass migrant influx to Europe at about a million per year in order to usher in a new European, trans-national political order. And so what Hungary is doing is, it is imposing legislation that would force significant transparency on the various NGOs in the country, such that they would have to reveal from where they get their funding and the purpose for which the money was received, and the government is highly restricting where that money can come from and what it can be used for.

Soros is basically being treating by Orban as the head of an extensive mafia network of NGOs and human trafficking. And this is all part of Orban’s consistent stand against Merkel and the efforts by Brussels to impose mass immigration quotas on the various nations of Europe. And keep in mind, these are not necessarily refugees; some if not most are merely labor migrants who are simply fulfilling the globalist economic system of moving to where the economic activity is, regardless of border, nation, and language. And one of the principal financiers behind this open-border push, particularly in terms of its promise for cheap labor, is of course the infamous George Soros.

Now this latest move by the Hungarian government is on the heels of a series of education reforms that were passed back in March that are threatening the future of what’s called the Central European University in Budapest, which is funded by Soros. Again, what is interesting here is that, while the culture wars in the US are seen more like a civil war, in that we are fighting agencies from within our borders, Hungary is depicting the NGOs of George Soros more like a foreign invasion, a threat from outside its borders trying to sneak in. Which is good strategy on Viktor Orban’s part; the nationalist populist politics today are driven by insecurities associated with porous national borders and foreign invasion, particularly from terrorists. So, Orban’s pushing of the mass immigration accusation against Soros who, at the same time is funding NGO’s that originate from outside of Hungary, is very popular and very effective.

So first, Orban is a xenophobe. But that xenophobia would be incomplete without the second predictable response from the secular left, which is that Prime Minster Orban is in particular an anti-semite. And this is because of course Soros is, yes you guessed it, a Holocaust survivor, and HE claims that the posters are derogatory towards Jews, so therefore they must be.

Now the beauty here is that while these accusations may have carried some weight back in the day, the vast majority of people in Hungary appear to see these xenophobic antisemetic epithets for what they are, the highly predictable response of anti-cultural, anti-traditional secular globalists. So if anything, it only corroborates what Orban has been arguing; so it is very interesting how the responses of the secular left are contributing to the synergy of nationalist populist sentiments.

And the irony of ironies is that Orban has been reaching out to and getting quite chumy with Israel prime minister Benjamin Netanyahu, who also despises Soros. So you actually have articles out there in the secular left media talking about Benjamin Netanyahu embracing anti-Semitism; the prime-minister of Israel is now an anti-Semite. It’s just beautiful to watch the whole leftist globalist narrative collapsing.

Nevertheless, the EU is responding in its highly predictable way; it has launched legal action against Hungary because their new laws would unduly restrict NGOs from carrying out there all so important work, and of course because they’re higher education law that would force Soros’ university to up and leave Hungary, which is incompatible with EU values of academic freedom and the right to an education. Again, notice, no cultural specificity, no history, no custom, no religion; ALL the EU stands for today is anti-cultural, anti-traditional standardized laws, rules and protocols determined and governed by a secular aristocracy. That’s all the EU is; and Viktor Orban is standing up to it, and doing so quite effectively, much to the EU’s dismay.

So we’re going to keep an eye on how things develop in Hungary; but they’re not alone. Other nations of central Europe, such as Poland, the Czech Republic, and Slovakia, the so-called Visegrad Four, are enacting similar policies in their respective nations, and of course Russia banned Soros’ foundation back in 2015 as a threat to their national security. So, we’re seeing a very formidable front against this secular globalist financier and his pro-EU backers. And we’ll most certainly keep our eyes on how things develop.