WAR IN EUROPE: The End of Pax Americana and our Multipolar Future! 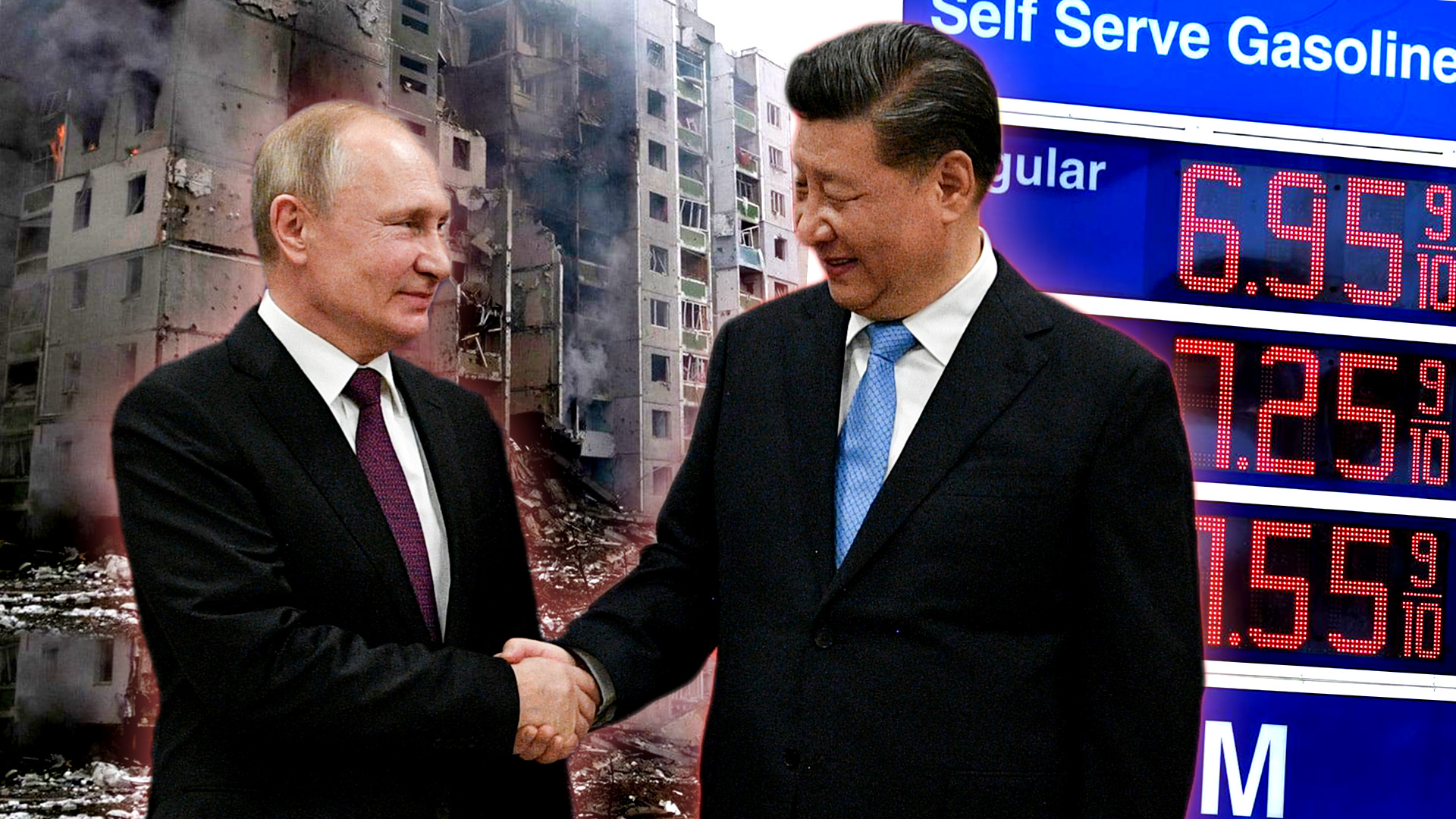 After nearly two weeks of fighting, total media chaos and propaganda, each nation joining one side or the other of a sanctions regime, and now huge supply chain and global energy crises, the diagnosis of the conflict in Ukraine as the catalyst of a new geopolitical order is proving correct. On Tuesday, March 8th the Biden regime announced they would be suspending oil imports as well as other key energy sources from the Russian Federation and on the same day President Putin announced suspension of exports to a pending list of “hostile nations” with the US being, presumably, at the top. With inflation soaring and gas prices already reaching record highs it is clear that the globalist empire around the world is collectively using this conflict to garner domestic support both for individual political regimes as well as the globalist sphere of the new multipolar realignment. Russian banks, including the central bank, have been targeted by heavy sanctions and cut off from the SWIFT global banking system and hundreds of multinational corporations like Visa, Mastercard, Disney, Netflix, and others have stopped providing services to the nearly 150 million citizens of Russia. Russia has responded in kind by banning Facebook and other western social media and is supposedly preparing for a total disconnect from the global internet system. Rumors are saying that all Russian businesses must switch to a .ru domain within the next week. Because of this sharp cut from the rest of the global online and financial infrastructure, Chinese services have been welcomed and integrated into many of the state financial institutions. The SWIFT banking network represents one of the pillars of the neoliberal, globalist financial system and with Russia now integrating with CIPS (the Chinese SWIFT alternative) the new multipolar world, separate from the power structures of Washington DC, London, and Brussels, is actualizing itself in real time. Many have made the obvious point that with globalist media propaganda wings, multinational fast food corporations, and global financial tentacles all retreating, that they are simply speeding up the creation of a true parallel system and society forged by Russia and its Eurasian allies. Not just China but India, Pakistan, Turkey, Mexico, and other large nations have rejected sanctions on Russia and have pledged to maintain a normal relationship with the world’s largest country. On March 8th the UAE and Saudi Arabia refused to speak to President Biden on energy cooperation and instead took a call from Vladimir Putin, openly rebuffing the current US regime in favor of the growing Eurasian sphere. In fact if one looks at a map the only nations rattling the saber and imposing draconian sanctions are the US/Canada, most EU countries, and then Japan and South Korea. These nations are the most controlled by the secular, globalist cultural and economic leviathan. Most nations are not interested in mythologizing about Ukraine, punishing their populations with insane prices and lower quality of life (check out the share of vital global resources Russian exports account for) ,  and pushing the world closer to a third world war.

The blue is the map of countries and territories that have imposed sanctions on Russia. The grey did not. Do you see a pattern? pic.twitter.com/hy1K0V7RHH

There is no way Russian Oil and Gas exports could get replaced. It's a mathematical impossibility.

The mainstream media around the world is working overtime to convince western populations that Russia is brutally destroying Ukraine while simultaneously failing militarily. That all Russians must be punished around the world for the actions of their government yet that Putin is imminently at risk of being overthrown by impending domestic protests. The doublespeak is obvious to those who have followed the past 8 years of Western-Russian relations but a shocking number of otherwise conservative Americans are beating the war drums for what would surely become a bloody worldwide conflict. Sean Hannity has always been a shill for the GOP establishment but his segment calling for the assassination of Vladimir Putin, a call he was joined in my Mark Levin, Lindsey Graham, and other globalist mouthpieces, was evidence of lingering neocon hawkishness still present in establishment conservatism. Thankfully the Biden regime and their NATO puppets in the EU have rejected calls from the media for a no fly zone over Ukraine but with Biden’s latest announcement to punish Americans and restrict Russian oil imports it is clear that anything is still on the table. In Russia, Putin’s popularity has skyrocketed in the wake of the operation in Ukraine. Sources trusted by western media claim he has gone from 61% to 71% support in the past two weeks and as more evidence of the US/NATO empire’s placement of biowarfare laboratories within Ukraine and impending Ukrainian assaults on the Donbass comes out, the domestic support for the operation in Ukraine will only increase in Russia.

Objectively, Putin's poll numbers have improved since the lead-up to and onset of the war.

This was predictable – a "rally 'round the flag" effect is common for wartime president.

Now to address the current narrative being touted that Russia is experiencing extreme logistical breakdown and is facing immense resistance from an underestimated Ukrainian army…this is complete fantasy. Not a single analyst has a tangible goal they can claim the Russians had going into this operation that has been foiled. Claims of high casualties and outsized loss of equipment are backed up with no evidence. In the first week of the war we saw systemic lies and propaganda rolled out for the American people. Stories like the “Ghost of Kiev” or other pieces of wartime propaganda about grandmothers and conscripted female soldiers taking down Russian equipment serve to “Marvelize” the conflict and paint an image of a plucky, heroic resistance holding their own against what is being presented as a Russian Anschluss. I said this in my interview with David Erhan at the outbreak of the conflict: we do not live in a comic book. The Russian advance has been successful. With ongoing negotiations with the crumbling Zelensky regime ongoing, and troops closing in on the capital there is no evidence of a true bloody wall of resistance. The bulk of the Ukrainian forces, concentrated in the East, are now effectively surrounded. The entirety of the Luhansk Oblast is now under the control of the Luhansk People’s Republic and the Donetsk Oblast is close behind. Continuing to perpetuate ridiculous propaganda does nothing but send more civilians into the line of fire and prolong the conflict. Based on video evidence and on the ground reporting it appears that Mariupol and perhaps certain areas of Kiev metropolitan area have somewhat outlasted Russian assaults but this is largely due to Russian Forces strongly minimizing civilian casualties and total infrastructure destruction. This has been a swift and decisive territorial incursion by the Russian Federation and will likely be studied in military history for years to come.

Map of Russian 🇷🇺 positions and territorial gains in the Ukraine 🇺🇦 as of evening March 8th 2022 pic.twitter.com/rU1ObCM8iY

In the negotiations with representatives of the Zelensky regime (it seems that one of the main Ukrainian negotiators was assassinated by Ukrainian nationalists) the Russians have made clear demands: “Ukraine must amend its constitution to reject any possibility of joining any bloc. It must recognize Crimea as Russia and LPR/DPR as independent countries. Russian military action will stop in a moment if conditions are met.” The prospect of a demilitarized eastern Ukraine, an independent/Russian Donbass, and a neutral state to the west of the Dnieper is exactly the result that realists (myself included) predicted before and at the onset of this conflict. I have had two long conversations on this conflict, one at the outset and the other on the evening of March 8th, on my friend David Erhan’s show and I encourage anyone who wants a deeper understanding of the history, religious implications, and multipolar future of the situation to watch both of those shows. What we are seeing is even more than a multipolar realignment. We are witnessing the return of history. A future now exists where historic, civilizational states and empires can stand athwart the secular, neoliberal order and, once again, use military force and warfare as a means to geopolitical and civilizational ends. Many are calling this the end of the “Pax Americana” (American Peace) which despite its name was not particularly peaceful for the people of Serbia, Iraq, Vietnam, Syria, Afghanistan, South and Central America, Libya or any of the other states the neoliberal order felt was standing in its way. What the creation of this new parallel system means for American dissidents can largely be seen as hopeful (especially in the wake of the huge de-banking and censorship campaigns run by western governments), but let’s not forget that our current regime will not let a good crisis go to waste. God bless!