Why North Korea's Missile Launch May Result In Its Re-Christianization 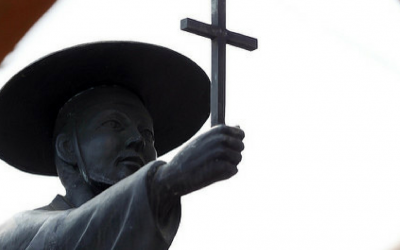 It is being reported that the UN Security Council is holding an emergency meeting at the request of the Trump administration. This is in response of course to the latest missile test by North Korea; but in many respects this test may have been a game changer. The missile has been confirmed as a multistage intercontinental ballistic missile. Our intelligence knew about North Korea’s desire to create a multistage ICBM, but thus far it’s been considered little more than a pipe dream given their limited resources. Well, now they’ve got one and they’ve successfully launched it. It landed somewhere in the Sea of Japan, about 500 miles from the launch site.

And this really does appear to be a game changer from geo-political vantage point. What nations are saying in public is one thing; you can be sure that no one, no one especially China and Russia want North Korea to have intercontinental ballistic missiles. And so, what happens next is going to be very interesting to say the least. It is US policy to thwart any attempt by the North Koreans to have intercontinental ballistic capability, which makes this missile test all the more provocative. The list of North Korea’s allies has grown very thin at this point. I don’t see China as being able to defend North Korea against such provocations. The Soviet Union is of course gone. So if this provocation continues, I really do not see anything short of US strikes on North Korea, bolstered by a South Korean-Japanese military alliance. I do not see North Korea taking those strikes sitting down, and the powder keg that is the DMZ that has been ready to blow for the last several decades in point of fact will. And I can only pray that the contingency operations have been so thoroughly planned out and thought through that the war would be over very quickly; that the command centers of North Korea would be quickly neutralized, and the military for all practical purposes would be decapitated and rendered in effect brain dead from the loss of command and control.

Now, as frightening as this scenario may be, all of this throws into relief the potential for the re-emergence of a very interesting phenomenon in the Korean peninsula, which some scholars have been wondering out loud about for the last decade or so, and that is the return of Christianity to North Korea. Many of us may be unfamiliar with the fact that the capital city of Pyongyang was actually referred to as the “Jerusalem of the East” by Western missionaries at the beginning of the twentieth century. To change the metaphor, Pyonyang was in many ways the Mecca for eastern Christianity before 1945. By 1908, Pyongyang had surpassed all other cities in Korea in terms of the number of self-supporting churches and active membership. In fact, the vibrancy of Christian culture in North Korea was so recognized among missionaries that their children were educated side by side with Korean children in missionary-sponsored Christian schools, and one of those students was a young girl name Ruth Bell, the future wife of Billy Graham. She was in fact educated in this Jerusalem of the East.

Now of course this all ended with the advent of the Democratic People’s Republic in 1948 and the suppression of Christianity by the so-called Great Leader, Kim Il Sung. But what’s so interesting here is that Kim didn’t replace Christianity with a Soviet inspired atheism; instead whatever Marxist and communist structures he put into place in North Korea, the scholar Brian Reynolds Myers has made the persuasive case that Kim Il Sung’s political ideology had more in common with Emperor Hirohito than it did with Lenin. This would account for the mythology of the eternal divine nature of Kim Il Sung, comparable to the Shinto Emperor who colonized North Korea for the first half of the twentieth century. That this new emperor cult was built precisely to replace Christianity appears somewhat corroborated by the fact that the first statue of Kim was unveiled on Christmas Day, in 1949. As Bruce Cummings has noted, just as Christianity allowed for the worship of only one God, so now North Korea would be allowed to worship only the deified Kim.

Now, what’s so fascinating here is that Christian worship did not die, but went underground. As the Korean scholar Sandra Park has so wonderfully documented, we get a glimpse of the state of Christianity with the testimonies of North Korean refugees who were able to successfully escape. And they’ve given detailed accounts of how Christian worship and belief continues to be passed down through families and through familial generations. There is no formal corporate worship taking place, let alone in the prop churches that have been set up by the government to please international standards of religious freedom. Instead, Christianity is being passed down from generation to generation through family successions going back all the way to the earliest Christian communities in Pyongyang, where children are taught to memorize the Lord’s Prayer and the Apostles Creed and the basics of the Christian faith.

But another thing, and I found this perhaps most fascinating, since 2013 the total number of North Korean defectors in South Korea was over 23,000. Among those 23,000, scholars have found that 90 percent of them converted to Christianity upon entering South Korea. In fact, virtually every North Korean refugee that you’ll find living in Seoul today is a practicing Christian. And what’s of further interest is that a comparable conversion rate took place among the number of North Koreans who came over during the mass famine; and the cool thing here is that most of them have returned back to North Korea and they have brought Christianity with them.

So a number of scholars are arguing that North Korea is primed to experience another mass Christian revival in their midst, comparable to what took place at the turn of the twentieth century, known as the Pyongyang revival. Again, this would not be a first for North Korea; instead, the re-Christianization of the country would be another example of what we’ve been calling ‘re-traditionalization.’ It would represent a return to a historic and vibrant Korean culture, such that its Christianization would not be a novelty but a return.

So whatever begins to take place here with the National Security Council – and it certainly warrants all of our prayers – together with the waning of our strategic patience as our policy was called towards North Korea, I do hope that the end result is nothing less than the re-unification of Korea, which does appear to be more and more inevitable, and with such unification, the promise of the re-emergence in the North of the Jerusalem of the East.